The Sentinel Docks are located in the northwest corner of the city. Ancient lamia-infested ruins known as Ancestor's Landing lie west of the port. Goats graze in the fields on the western outskirts of Sentinel. Head south from the docks and you'll find the Customs House and the local Fighters Guild, which is connected to the late guildmaster's sleeping quarters via an overpass. Crafting writs can be turned in below this overpass.

The residential district is also along this street. Farrokh House is at the corner between the Customs House and the Fighters Guild. Desert Star Tea House lies east of the guildhall, and Ilkhas al-Azif's Home is across the street from that facility. The Frozen Palms Tavern lies a little further east, and then the road opens up into a courtyard. Sisters of the Sands Inn is to the north, and a bridge to the district containing the palace lies to the south. The local bank is next to the bridge. An entrance to Sentinel's outlaws refuge is behind the Sisters of the Sands Inn. You can purchase a relatively cheap apartment at the Sisters of the Sands.

If you continue east along the road and then head north, you'll end up on Scholar's Way, a street containing the alchemist and enchanting stores, as well as the local branch of the Mages Guild, which is housed in a tower. The Sparring House and the Royal Seraglio are located along this road. The northern guard tower is next to the Royal Seraglio. The smithy lies further east. A trap door in front of the smithy brings you to the beach between Wayfarer's Wharf and the Sentinel Docks. There is a heavy sack in this tunnel.

Wayfarer's Wharf is a port where you can attain passage to several places in other zones, and is located northeast of Sentinel. If you headed south down the hill from the Sparring House and continued down the road east, you'd find yourself at the city's eastern gate. Heading out of the gate and taking the path north leads you to Wayfarer's Wharf. Along the way, you'll see a general goods stall, a stable with no stablemaster, and a wall of tombs with a shrine to the Yokudan god of death, Tu'whacca.

If you crossed either of the bridges south of The Forebear's Forge or the Sisters of the Sands Inn, you'd find yourself at Sentinel Palace. A courtyard with a statue lies north of the palace, and General Thoda's Residence (the abode of King Fahara'jad's favored general) is to the northeast. The tower containing the entrance to the Impervious Vault is located between the palace and General Thoda's house. The House of the Silent Magnifico lies down the street southwest of the palace, and is available for purchase.

A long street is nestled between the cliffs containing the inn and the palace. You'll find the Sentinel Bazaar along this road. The bazaar is split into eastern and western sections; the border between them lies beneath the large stone bridge heading southeast of the Sisters of the Sands Inn. A stable is located in the western half of the bazaar. The city's skyshard is located atop the guard tower at the southwestern end of the bazaar. A staircase next to this tower leads you back up the hill to the north, towards the tavern and the bank. The guild trader stalls lie further west of the bazaar, and southwest of them is the wayshrine. If you head straight south from the southern end of the bazaar, you'll end up at the exterior entrance to the local outlaws refuge. 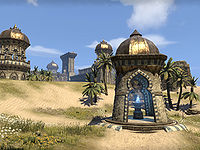 Sentinel Wayshrine is located southwest of the main city, on a looping road which leads from the bazaar around to the docks. A copy of the lore book, Ancient Scrolls of the Dwemer I-B, is located beneath a tarp southwest of the wayshrine, near a pair of Dwarven pots.

†This NPC only appears during the related quest. 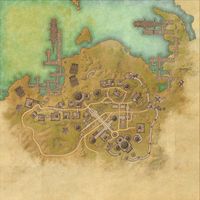 A map of Sentinel