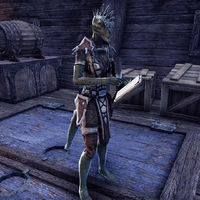 Tumma-Shah is an Argonian privateer who can be found on The Spearhead in Stonetooth Fortress, Daggerfall, and Port Hunding. She is one of the loyal crew members that stayed with Captain Kaleen during The Spearhead's mutiny. She gives you some information about the aftermath of your departure from Coldharbour.

When you wake up on the Spearhead, Tumma-Shah will be nearby in the cabin and can spoken with to find out what happened.

"The withered stalk flowers again. It is good to see you alive and well"
How did I get here?
"We found you floating in the water. I'd seen corpses with more life in them, but Captain Kaleen dove in and fished you out anyway."
So she rescued me herself .... Who is she?
"The captain of this vessel. She's currently ashore, recruiting for our latest contact.
You might want to pay your respects, seeing as she saved your life."
I'll go do that.

Dialogue once The Broken Spearhead quest is started:

"The withered stalk flowers again. It is good to see you, alive and well."
Where am I, exactly?

"You're on the Spearhead, Captain Kaleen's ship."

"I am one of Captain Kaleen's few remaining loyal crewmembers. The rest ... well, the less said of those bloody-minded mutineers, the better."

If you spoke to Mihayya first, she'll say:

"The withered stalk flowers again. It is good to see you, alive and well."
Did Kaleen rescue me?

"We found you floating in the water. I'd seen corpses with more life in them, but Captain Kaleen dove in and fished you out anyway."
So she rescued me herself …. Who is she?
"The captain of this vessel. She's currently ashore, recruiting for our latest contract.
You might want to pay your respects, seeing as she saved your life."
What happened to your crew?
"The mutineers? Some met Sithis. Others fled like the dryskin fools they are.
Captain Kaleen commands this ship. I honor my captain and stood by her during the mutiny. The ship is still ours, but her crew is gone."
Just you and Kaleen stopped the mutineers?
"We are not alone. First Mate Lambur stood with us, as did Kasan Five-Claws. Even little Nicolene wielded a dagger for Kaleen.
Xuth! She is lucky to be alive. Besotted, sun-blessed little fool."
What caused the mutiny?
"Captain Kaleen told the crew we would no longer raid Breton galleons, by order of King Fahara'jad.
Breton galleons have much treasure, thus the crew was displeased."

"Captain Kaleen is ashore, looking for a crew who will not attempt to seize the ship. I would worry, but Lambur is with her.
Those who trouble Kaleen when Lambur is near often get their heads twisted backward."

While on Betnikh, Tumma-Shah can be found in Carzog's Demise, during your efforts to find and stop the Bloodthorn Cult from using an Ayleid device. She will be in the Western Sanctuary, injured in the southern hallway between several fire traps.

"Worry not, life still flows strongly through me. The others are waiting for you. I will be safe here."'

After assisting the captain on Stros M'Kai:

"The crew of the Spearhead grows again. I did not think to see it so soon. The sun shines on us."

Once you arrive in Betnikh, you'll find her on the main deck:

"Sometimes, I miss the swamps of my homeland in the Black Marsh. But it is good to be gone from the dry air of Stros M'Kai."
Where am I, exactly?
<…Same as above>
Don't you want to go ashore?

"Xuth, you speak as one new to the high seas. I have seen this island and countless others like it.
The captain and Chief Tazgol have an arrangement. We have visited Betnikh more times than I can count."
What type of arrangement?
"Chief Tazgol pays us well, to acquire and deliver cargoes. I believe he pines for the days when his ancestors ruled the high seas, plundering and pillaging. Perhaps he sees some of himself in Kaleen."

Tumma-Shah will be inside the ship taking notes. Unlike most of the other crew members, she does not care what you decided in Carzog's Demise:

"You made a decision. The specifics do not matter. We would not be here if not for you, and Betnikh would be in the hands of a cult.
I do not know if I will sail with Kaleen or Lambur, but I would sail with you any time."

"Ah. I erect the spine of respect."
How have you been, Tumma-Shah?
"Since Captain Kaleen took us to war against the Elves, life has been interesting. Thus far, none among us have fed the roots of the tree. Let's hope it will remain so."
Have you seen much battle?
"We sailed on Daggerfall during the attack by the Elves, but we are not a warship. We carried supplies. There were a few close calls with High Elf mages.
One died from an arrow to the neck Sithis smiled on us both."

"The wind and the water smile upon you, my friend. I had not expected visitors. What brings you once again to the Spearhead?"
When did you make port?
"Not long ago. The Forebear King has kept us quite busy. The compensation for our efforts has been generous as well. All told, it is a good time to sail the seas."
How are Kaleen and Nicolene?
"Quite well. Kaleen has taken Nicolene as her first mate, and I believe the arrangement suits them.
They complement each other. They trust each other. This bodes well for a successful voyage."
How is Kasan?
"He and Kaleen remain close, despite their disagreement at Betnikh. It is good to see. We will all be sailing until the Spearhead sinks, and perhaps even on after that."