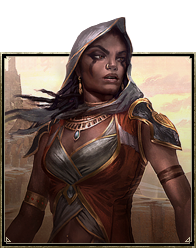 The Redguards of Hammerfell are talented and athletic warriors, born to battle. A desert people, their ancestors migrated to Tamriel from the lost continent of Yokuda. Their culture is based on preserving ancient traditions and defying their harsh environment. They prize honor and dignity above all else, combining a deep reverence for the divine with a suspicion of all things magical. Their capital is the merchant port of Sentinel, but their roots are deep in the sands of the Alik’r Desert. In their youth, Redguards endure a rite of passage in the desolate wastes of Alik’r as a test of endurance and discipline. Only the strongest survive.

A list of all the Redguards encountered in ESO can be found here.

The racial skills of the Redguards reflect their ancestral legacy as sword masters, giving them bonuses to shields, base stamina, stamina recovery, movement, and duration of effects from food. Their ability to flow in martial combat is unparalleled.

Redguards have an associated skill line that complements their lore-based abilities with a focus on quicker stamina regeneration and improved One Hand and Shield abilities. Abilities are listed below. Notes