Bangkorai is a region connecting the northern reaches of Hammerfell with the east of High Rock. It stretches from the heavily forested border with Stormhaven in the north, to the blistering heat of the Alik'r Desert in the south. The Bangkorai Pass in the middle of the region marks the border between the region of Ephesus in High Rock, and the Fallen Wastes in Hammerfell. The Reachmen have been causing trouble in the north of region, and there are fears of an Imperial invasion from the south. As a result the populace is unsettled, hoping for aid from either King Fahara'jad in Sentinel, or High King Emeric of Wayrest and the Daggerfall Covenant, to repel the troublemakers.

The region of Mournoth in the north is centered around the Bjoulsae River estuary and the port city of Evermore. The climate here is temperate, and the weather switches periodically between sunshine and showers. The witches of Glenmoril Wyrd have camps in the area, and they are becoming increasingly wary of the Dark Witnesses, a Reachman clan who have long desired to see Mournoth returned to the Reach. Ephesus is the narrow central region of Bangkorai, which shares most of the geographical aspects of its northern neighbor. The region stretches between St Pelin's Graveyard in the west, and the ancient ruin known as Arlimahera's Grip in the east. The Knights of Saint Pelin maintains the Bangkorai Garrison in the center of the region, which guards the pass between Ephesus and the Fallen Wastes. Even when the pass is closed, it is possible to travel between these two regions using the Sunken Road. Although traditionally part of Hammerfell, the Fallen Wastes are currently ruled from Evermore like the rest of Bangkorai; however, sightings of the Seventh Legion near Hallin's Stand have lead to fears of annexation by the Imperials. 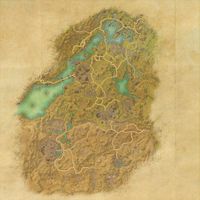 A map of Bangkorai

This Elder Scrolls Online-related article is a stub. You can help by expanding it.
Retrieved from "https://en.uesp.net/w/index.php?title=Online:Bangkorai&oldid=2563802"