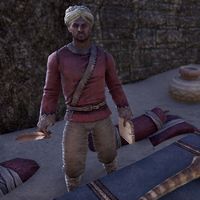 Neeneban is a Redguard merchant found in the city of Sentinel. He has a pet lizard named "Monkey".

"Welcome to Neeneban's Emporium of strange and wonderful things!
Can I interest you in a lizard-catching net … or perhaps a trained lizard?"
That's a big lizard.
"Oh, you must mean Monkey! Yes, he is adorably large, isn't he? I'm afraid I spoil him—only the best bugs are good enough for my Monkey.
He's quite smart, aren't you, Monkey? Quite a little smarty."
You named your lizard "Monkey"?
"Yes! It may seem odd, but it makes sense to me.
From the time I could walk, I wanted a pet monkey. I pleaded and begged, but my father always refused. "Monkeys are arboreal," he said. I still don't know what that means."
So you got a lizard instead?
"One has to start somewhere! Monkeys are terrific—everyone loves monkeys. And if I can't have a monkey, a lizard's the next best thing.
You know, sometimes I wonder how my life would be different if my father had only given me a monkey."

During The Impervious Vault, Gabrielle Benele will send you after some ingredients. If you speak to Neeneban, you can ask him what he has in stock.

Do you have worm's head caps?

"Worm stalk caps? No, I don't. Lizards enjoy worm stalks, but they're also poisonous to them.
Dead lizards don't sell, except in times of famine. There isn't a famine right now."

Do you have any flame stalk caps?

"Flame stalks! Tasty treats. They help with indigestion … for a lizard at least.
You're not a lizard. What do you need them for? For some spell with Gabrielle I bet, and she doesn't even like lizards ….
Oh well. Just take them, but she owes me!"

While looking for a racing lizard for the races at Duneripper Downs, Neeneban is one of the people you can approach.

This Elder Scrolls Online-related article is a stub. You can help by expanding it.
Retrieved from "https://en.uesp.net/w/index.php?title=Online:Neeneban&oldid=2135047"
Last edited on 12 April 2020, at 03:25