Rivenspire is the northern region of High Rock. It is a gloomy region, with jagged rock formations punctuating the rather bleak lowlands. The majority of creatures found in Rivenspire are of the aggressive type, including wolves and wraiths. Local hunters also make a living off the abundant giant bats and spiders. It is separated from Glenumbra and Stormhaven by the Darguard ridge of mountains.

Following the events of Ranser's War, Rivenspire has been ruled by a triumvirate of Breton noble houses: House Tamrith, House Montclair and House Dorell. Directly south of the capital city of Shornhelm sits Oldgate, the northern end of the mountain pass to Stormhaven. House Tamrith primarily has holdings in Eyebright Feld, the western region of Rivenspire, with enterprises focusing on agriculture and commerce. While the terrain is quite sparse, pastoral farming has survived at Hinault Farm due to the frequent rain showers prevalent in the region. Silverhoof Vale presents another good example of adaptation, as the Horsemen of Yokuda have abided there for three thousand years. The rocky region of Westmark Moor in the southeast is the location of Traitor's Tor, where King Ranser made his final stand against the Orcs of Wrothgar at the climax of Ranser's War. The nearby Old Shornhelm Ruins have become a major encampment of the Bitterhand Bandits. To the northeast, the main road leads through the town of Fell's Run and into Boralis, home of House Dorell's city of Northpoint. Unlike the southern regions, which are predominantly overcast, the coastal region of Boralis frequently sees clear skies. In the west of Boralis lies the ruins of the ancient Ayleid city Erokii, above which towers the mystical Doomcrag.

Rivenspire also contains an entrance to the Shipwright's Regret group dungeon, but the Ascending Tide DLC is needed in order to access it.

A troll named Garden-Gulp stands in a ruin outside. Across from the cave is a broken statue with the lorebook The Doors of Oblivion, Part 2 at its base. (map) 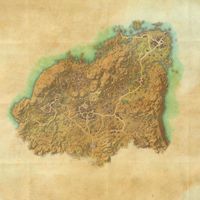 A map of Rivenspire

This Elder Scrolls Online-related article is a stub. You can help by expanding it.
Retrieved from "https://en.uesp.net/w/index.php?title=Online:Rivenspire&oldid=2669411"