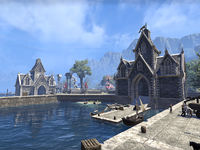 The Alinor Docks are the bustling trading port of the city of Alinor to the south and its surrounding locales. 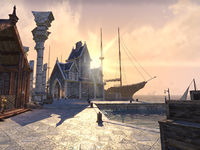 The ship you purchase as part of the Colossal Aldmeri Grotto is moored here on the leftmost quay. A letter can be found on crates on the middle quay, and a chest can spawn further down the docks. Ciryelda the navigator can be found on the rightmost quay.

A simple safebox can be found on the docks, on the back of a cart near Zandal (who is next to a copy of Tips for a Khajiit in Summerset V. 1). A heavy sack is located in a boat west of Zandal. Another simple safebox can be found in the small warehouse Justiciar Fannariel is inspecting. A Letter to Captain Oghul lies on a crate at the corner of her pier. A heavy sack lies behind the crate Raynilie the Stormhand is sitting on. A chest can spawn east of this heavy sack. A Thieves Guild Dead Drop containing one of the lost Psijic Relics is on the end of one of the piers.

This Elder Scrolls Online-related article is a stub. You can help by expanding it.
Retrieved from "https://en.uesp.net/w/index.php?title=Online:Alinor_Docks&oldid=2225800"
Last edited on 5 October 2020, at 21:57