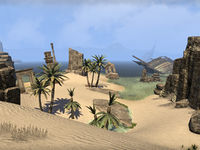 Ancestor's Landing is an ancient Yokudan ruin in the northwestern Alik'r Desert, west of Sentinel. Mudcrabs meander along the shoreline, and Lamia Divas inhabit the seaside ruins. Giant Scorpions skitter near the cliffs south of the beach, on the southwest side of the locale. Assassin Beetles loiter by the cliffs off to the southeast. There is a camp with two jackals along the cliff southwest of Ancestor's Landing. Here, you can find a copy of the lore book, Redguards, History and Heroes, V. 1 sitting on a chair.

Na-Totambu's Landing lies a short distance off to the west. Two jackals scavenge beneath a cluster of palm trees where a runestone can spawn, in the dunes south of Na-Totambu's Landing. One of the jackals occasionally heads north to drink water from the bay. A Giant Scorpion Corpse lies west of them, beside the westernmost cliffs at Ancestor's Landing.

This Elder Scrolls Online-related article is a stub. You can help by expanding it.
Retrieved from "https://en.uesp.net/w/index.php?title=Online:Ancestor%27s_Landing&oldid=2390900"
Last edited on 18 April 2021, at 13:08