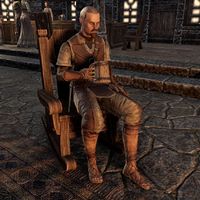 Captain Albert Marck is a Breton captain and smuggler who recently lost most of his crew to the Ember-Eye Slavers. Marck also took on Lambur and those that followed her after the split of The Spearhead crew post-Betnikh.

South of the Koeglin Lighthouse between the two islands in the bay, you'll find a Breton hiding in the shallows, glaring at The Bloody Scupper muttering "Of all the slavers, of all the seas, it had to be Captain Angarthal."

"Fires of Oblivion! These motherless slavers have captured my entire crew!
I'm not one to shy away from a fight, but I think I may be in over my head."
How were they captured?
"Captain Angarthal—the fobbing dog! Cruelest slaver in the Azurian Sea and now in Iliac Bay. He must've put out the signal fire in the lighthouse.
It was pitch black. We hit the rocks and the slavers were all over us. Captured the entire crew."
Where are they?
"The slavers took most of the crew up the beach, but Salach, Lidenar, and Ozor are still there. Other captives too, but they're no concern of mine.
I'm too waterlogged to fight, but if you'll free my men, I'll make it worth your while."
I'll free your men.

After accepting the Captive Crewmembers quest:

"Watch out for Captain Angarthal—his axes are stained with the blood of more sailors than I can count. He's a monster.
Hey though. If you're feeling tough, I say take that bastard out. Won't hear any complaints from me."
Any idea where they took the rest of the crew?
"I don't know for sure, but I overheard something about the slavers taking over a village up the beach. I'm betting they took the rest of the crew there.
If there's a silver lining to that cloud, it's that they're out of Captain Angarthal's reach."
You and Captain Angarthal have a history?
"Never met the man myself, but his name's well-known in these waters.
Angarthal's notorious for terrorizing the Abecean Sea, enslaving the Altmer. Guess he joined up with this outfit after the Ebonheart Pact was formed."

When met on the beach after freeing his crewmembers and killing Angarthal:

"Ozor, Salach, and Lidenar are free and Captain Angarthal is dead. I believe this day is getting better.
I may have lost my ship, but you've restored my hope."
What about the others?
"They were marched off to the east. My first mate went after them, but I can't imagine she'll be able to free them alone.
If you travel in that direction, keep an eye out for her. If she doesn't return soon, I may just have to track her down myself."

After completing the quest:

"I hope my first mate didn't get herself captured.
She's the best I've ever had. If she doesn't come back soon, I'm going after her."

If Captive Crewmembers has been completed, he can be found alongside First Mate Elvira Derre at Steelheart Moorings.

Captain Albert Marck:"Now we're in business! This is the one I was talking about, Elvira!"

"Go do your thing, friend. Watch out for Ma'jhad Kha though.
Captain Angarthal was just one of his lieutenants. A brute, really. This Ma'jhad Kha is a spectre from seafarer ghost stories—a dark legend that I didn't even believe until now."

Once the crew has been rescued and Ma'jhad Kha is defeated:

"You saved me, you saved my crew, you saved Elvira, and you showed up the most notorious slavers on the seas.
I'd bet your name will be pretty well-known after this."

After Divert and Deliver has been completed:

"Pulled it off again, and pulled one over on Ma'jhad Kha to boot!
You are a character straight out of a storybook. I hope we cross paths again."

Captain Albert Marck can be found on the ground floor of the Cloudy Dregs Inn drinking and procrastinating so he doesn't have to go upstairs to talk to S'rashi about the money he owes.

"Hey friend. Care to have a drink?
You'll have to buy though. I'm flat broke. Can't even pay my debts. Have to go upstairs and tell S'rashi I don't have his money …. You think he'll have me killed?"

Once The Debt Collector's Debts is started and Marck is approached:

Actually S'rashi sent me to collect the debt.
"Oh? So you're going to kill me? Because … I don't have the money. Nothing to be done for it. I'm not going to run though. I'm a man of integrity, at least in this case.
You don't think S'rashi could give me a few more weeks?"
I'll ask him to give you a break.

If you spoke to S'rashi but haven't decided on an option to deal with Marck's debt yet, he will say:

"Go ahead. Do whatever you have to do. I won't hold it against you.
I've killed a man or two myself who owed me money. It's just the way it goes."

While on the last tier of the quest:

"You keep walking around, going in and out. I'm guessing this means you're not going to kill me? That's good."

After dealing with Marck's debt one way or another:

"I'm just going to assume at this point that S'rashi's giving me a break. True or not, that's what I'm going with.
Means I can head back to the ship …. Well, maybe just one more drink first."

When you arrive at Sentinel Docks, undead can be found roaming around, as you approach Marck, you may hear him say:

"Zombies ... hordes of the damn things!"

You can then talk to him about the situation:

"Of all the ports in Tamriel, why this one? I sailed all the way across the Iliac Bay and I need a glass of grog!
I've shared a drink with some unsavory characters, but I draw the line at zombies. I think I'll stay off the docks for now."
Zombies on the docks?
"You can't smell their soggy, rotting flesh? Just walk down the causeway there, you'll see them—a damned army of them.
Question is, why aren't the Sentinel guards doing anything?"
Maybe they're all dead.
"Nah. I've seen a few of the bootless louts skulking around, behind crates and such ….
Someone needs to go grab one of the guards and ask what in Oblivion's going on here. You up for it?"
Sure. I'll try to find out what's going on.

Captain Marck can be asked further questions about the situation and what he and his crew have been up to.

"There you go. Give the guards a kick and tell them to get to work. I've got cargo to unload.
If the guards can't help us, look for the dockmaster. Maybe he's got half a brain … unless the zombies have eaten it, of course."
Do you still owe money to S'rashi?

"As if this day hadn't gone to Oblivion already … you feel the need to remind me of all my debt?
Yes, I still owe S'rashi. The Dawn Posset is a quality ship; it'll take time to pay her off."

You have some new crewmembers?

"Of course. Lost the ship at the Koeglin Lighthouse, and the crew moved on … I'm lucky Elvira stuck around.
We bought the Dawn Posset in Wayrest and took on a new crew. Good people; we're due for a streak of luck after this."

What are you doing here in Sentinel?

"How do you think I make a living? I buy there, sell here. It's what I do. All legitimate, of course.
Picked up a load of timber in Wayrest—it'll sell for a pile of coin here. It better."

After the quest, he says:

"Fobbing cheats! I just let a full cargo hold of timber go for half its value! I don't like the way these Redguards negotiate.
I'll never get square with S'rashi at this rate."

He can be found alongside Elvira Derre at the Northsalt Village Docks.

"The old Khajiit lady in the wagon read my palm and told me that is where I needed to be for my luck to change.
I'm staying right here until it does."

During Favor for the Queen:

"So you're headed out to the desert too? That works. I got some timber to sell there in Sentinel.
I sure as Oblivion better make more off this trip than the price of your fare."