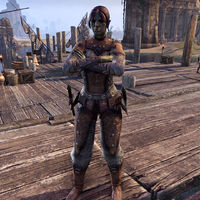 Lambur is an Orc who can initially be found on Captain Kaleen's ship, The Spearhead, in Port Hunding, and later participates in several quests on Stros M'Kai and Betnikh.

As you approach her location on the docks, you'll hear her and Captain Kaleen arguing:

Lambur : "I'm sick of this island, Kaleen. I should be in Betnikh, visiting my people."
Captain Kaleen : "Think, Lambur. How will we get there without a crew?"

If you try to speak to her before speaking to Kaleen, she'll gruffly tell you to "Speak to the captain. She's the one who likes to talk."

After rescuing Jakarn, she'll be waiting outside Captain Kaleen's Hideout where she'll say:

"Hey! The captain's looking for you."

If you recruited Lerisa first, she will alternatively say "Good to see you back in one piece."

What's going on?
"Thanks to your work, we can go ahead with the heist. We've even got a few extra sailors clamoring to join our crew.
You should talk to the captain upstairs."
I'll go speak to her.
If you speak to her again, she'll only say "The captain's inside."

Once you've completed the heist and are back on board the Spearhead, Kaleen will call the crew to stations and Lambur will breathe a sigh of relief:

If you speak to her she'll say:

"Captain Kaleen took her time getting off this damned island. Doesn't surprise me. Orc problems aren't her problems.
But we'd be stuck here if not for your help. I won't forget that."

Lambur can be found in Betnikh prior to starting the Stros M'Kai events. She'll only say:

After Stros M'Kai, you'll find her inside the walls of the Stonetooth Fortress (Your response options appear to change if you've already completed any of the story quests):

"This was part of a larger plan. I'm sure of it!"
What happened? / What happened, Lambur?
"The Bloodthorn Cult assaulted the fortress. They were repulsed, but they stole a Breton scroll the Orcs found here long ago. Chief Tazgol thinks the attack failed but I'm not so sure."
What do you mean? / Why not?
"The cultists retreated after the initial assault; they came here to steal that scroll, I'm sure of it. But why? Have they set a trap for us? We must know before the chief decides to attack."
How can I help? / Where do we start?

Lambur will now start you on the three story quests for Bethikh, Into the Hills, Tormented Souls, and Unearthing the Past. Her dialogue will change depending on which quests have already been completed. If you've not completed any of the three:

"Start with Shaman Laganakh. She witnessed Bloodthorn rituals in the Carved Hills. She's waiting by the longhouse south of here.
Cultists were also seen at Moriseli, to the north, and Grimfield, west of here."

If you've completed Into the Hills and Tormented Souls:

"Start in Grimfield. Warchief Tazgol sent a few scouts to harry the Bloodthorn there until we can deal with them. We need to stop them from raising more zombies."

You can then ask her about any of the places you've not completed:

What can you tell me about Moriseli?

"It's an Ayleid ruin. Years ago, Breton raiders attacked us. An outnumbered patrol held there for weeks until they were wiped out. Later, our army destroyed the raiders.
It's just a ruin, really. I don't know what the Bloodthorn want with it."

What about Grimfield? That's an ominous name.

"It's a graveyard. Not ours—Breton. When we conquered the islands hundreds of years ago, War Chief Yzzgol left it intact out of respect for our enemies.
We don't desecrate graves, but the Bloodthorn Cult will. Plenty of fresh bodies."

What do you know about the Carved Hills?

"It's mostly wilderness. There are Ayleid ruins, but they were looted long ago.
I don't know what the Bloodthorns want there, but Laganakh might know more."

Once you've completed the three prerequisite quests, you'll find her inside the Stonetooth Fortress courtyard:

"You're back. Good. Do you know what this cult is planning?"
The cult seeks a powerful relic beneath Carzog's Demise.
"Bloodthorn Cultists were sighted at those ruins. Chieftain Tazgol has already taken the army to deal with them. They're walking into a trap!"

"Chief Tazgol is leading the Orcs toward Carzog's. He's determined to wipe the Bloodthorn Cult off Betnikh."
What's wrong? You sound worried.
"Chief Tazgol doesn't see the danger. The Bloodthorns are after an ancient Ayleid weapon that we know nothing about. We must catch up to Tazgol and stop him from rushing in!"
Let's get going.

Lambur will address a nearby orc:

Lambur: "Quickly, to Carzog's to deal with this threat!"
Seamount Soldier: "Yes, sir!"

The two of them will run off. Catch up with her at the ruins and she'll address Kharsh outside the complex:

Lambur: "Commander Kharsh, what's wrong?"
Kharsh: "The Bloodthorns have raised a spectral army from the depths of the ruins. We can't defeat them!"
Lambur: "Get the wounded back to the fortress. We'll put an end to this!"

Neramo: "The cultists have somehow sealed the doors with the welkynd stones."
Lambur: "Find a way into the ruins."
Lambur: "I need to find Kaleen!"

Lambur will then run off again towards the port.

While trying to get inside the ruin, Lambur will be impatiently waiting:

"Orcs are dying, worse than dying. Get us in there!"

Inside the Inner Sanctuary, you'll find Lambur once again:

"No time to waste. Find that relic!"

Once you've defeated Vardan, you'll return to the mortal realm to witness a schism among the crew:

Lambur: "Strange that such a small thing can cause such terror. It must be destroyed!"
Captain Kaleen: "Hold on. Let's think about this."
Lambur: "What's to think about? It killed hundreds of Orcs!"
Captain Kaleen: "The cultists did that. In the right hands, this could defend the Covenant against invaders."
Lambur: "I'm not giving that thing to the people who leveled Orsinium!"

Speak to Lambur and she'll say:

"Destroy the relic, now! Didn't you hear the screams, as those things consumed the souls of my people?"
This is a hard decision.
"It should be an easy one. You must destroy it. Do not hand it to the ones who leveled Orsinium and tried to exterminate all my kind!"
Orsinium? What do you mean?

"Orsinium used to be the Orc homeland. Breton and Redguard kings have a nasty habit of burning it to the ground.
Now the Covenant will solve all our problems? You give them the relic, they'll use it to keep Orcs in line. If not now, then one day."
How likely is that?
"This object is a curse, a danger to all. It can be turned against anyone as easily as Vardan turned it against the Orcs. Unless you want me as an enemy, destroy that thing!"
Thanks for your advice, Lambur.

I'm still not sure.

"This object is a curse, a danger to all. It can be turned against anyone as easily as Vardan turned it against the Orcs. Unless you want me as an enemy, destroy that thing!"
Thanks for your advice, Lambur.

If you try to speak to her again, she'll only demand, "I am done talking. Make the right decision!"

If you decide to keep the relic, she'll only say:

"Traitor! Out of my sight! How could you keep that thing?"

You can also hear her say:

Lambur: "You're a fool. Thousands will die horrible deaths thanks to you. Get away from me."

Back in Daggerfall, she'll say:

"I will never forgive you for what you did. That relic is going to cause horrible suffering in the world.
I'm leaving this ship, leaving Kaleen. Perhaps I'll go out on my own. Whatever happens, stay out of my way."

If you decide to destroy the relic, she'll say:

"The relic is gone and my people's souls are at rest. I thank you for your choice."

When you speak with her in Daggerfall, she expresses her gratitude to you and announces that she won't be staying with Kaleen for much longer:

"I know going against Kaleen was a hard thing. It was for me as well. We have more history together than you can imagine.
Even so, I'm leaving. It's time to start my own crew, sail my own ship. You, my friend, would be welcome with us anytime."

Lambur can be found in Wayrest aboard Captain Marck's ship. Her dialogue differs depending on the decision made about the Carzog's Demise Relic.

When you arrive at the Sentinel Docks, they will be swarming with undead. Lambur will be one of the people protecting the ship.

"I'll protect the ship and Captain Marck. None of these dead men are getting past me.
Get out there and deal with it. Do what you do best."

After you have stopped the attack, you can talk with her some more.

"You did it. You always do. You have my thanks."
What will you do now?
"Secure the Dawn Posset. Protect her captain. Sentinel is not a place to leave your ship unattended, especially after the docks have been attacked.
This is my ship. My crew. I won't let anything happen to them."

This Elder Scrolls Online-related article is a stub. You can help by expanding it.
Retrieved from "https://en.uesp.net/w/index.php?title=Online:Lambur&oldid=2489847"
Last edited on 12 September 2021, at 22:37