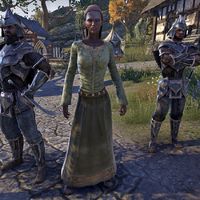 Envoy Darima is a Redguard diplomat who can be found visiting Alcaire Castle. However, this visit has ruffled a few feathers and the situation between the Reguards and Bretons has become tense.

She can be first encountered outside the Alcaire Castle gates, flanked by her guards and being denied entry by Dame Falhut. If you speak with her, she will explain why they have come to the Castle.

"These Knights of the Flame, they insult King Fahara'jad by refusing me entry.
I have an urgent message for Duke Nathaniel and I am a close friend of the Duchess. I cannot understand why the Knights are so stubborn."
Why come with an armed escort?
"An armed escort is customary in Alik'r. We mean no insult, and certainly no threat. They say we bring an army. An army would be hundreds. This is merely one regiment.
If you might convince the Knights to listen to reason, I would be obliged."

After speaking to Dame Falhut, Darima will add:

"Surely you can see the absurdity of this situation. I hope you will speak to this Sir Hughes or the Duke himself.
Please, tell them to let me in. I mean no harm. Ask the Duchess."

Later you'll find her in the Duchess' room where she'll thank you for your assistance:

"I must thank you again for interceding on my behalf. Sir Hughes spoke with Dame Falhut, and I was promptly allowed entry.
If only we could convince them that we came in peace. If only it was that easy!"

The Duchess will tell you about the attempts on her life and Darima will be outraged:

"I cannot believe one of our own is behind the attacks on Duchess Lakana.
There must be some other explanation. There has to be."

Return from speaking to General Thoda and she'll insist:

"You spoke with General Thoda? Please tell us, tell the Duchess what he said."
Dame Falhut was the assassin.
"Dame Falhut? By Ruptga's beard! I knew that wench was capable of dark deeds the moment I laid eyes on her!
She will pay for her crimes. I only pray there aren't more traitors involved in this conspiracy."

After speaking to the Duchess, Darima will urge you to your duty:

"The Duchess must be kept safe. I will stay here while you speak with Sir Hughes.
I hope he will send additional security to protect her."

Sir Hughes will ask you to meet him in his home to discuss Dame Falhut's betrayal. When you arrive, you'll find Darima in binds:

"You! Did Sir Hughes send you to kill me?"
Why would I want to kill you?
"You're not here to … oh, merciful Stendarr. Lakana!"
Sir Hughes is checking on her. She's safe.
"No! She's not safe! Hughes is going to kill her! He's crazy—something about his dreams. If you don't believe me, check his journal. He was writing all about it.
First though, untie me. I have to get back to the castle and warn Lakana!"
Hold still.

Release Darima and she'll leave the building heading to the castle. Enter the Duchess's room and you'll witness a gruesome scene:

Envoy Darima: "By the gods! They've murdered the duchess!"

Speaking to her before you examine the body:

"Lakana. My friend. This can't be happening. How can she be dead?"

After the quest is completed:

"King Fahara'jad will be devastated. He'll want someone to answer for this."

Inside Firebrand Keep, you'll be faced with a choice of Sir Hughes' fate. Darima will tell you her unwavering opinion:

"King Fahara'jad is furious over the death of his daughter. He demands an immediate execution for her murderer."

If you decided to have Sir Hughes executed, she'll say:

"King Fahara'jad will never forget the loss of his beloved Lakana, but I hope this man's death will bring him some sense of peace."

If you decided to spare Sir Hughes, she'll say:

"I fear King Fahara'jad will not be pleased with this outcome. I will do my best to explain the circumstances, but there may be political repercussions."

After the fate has been decided, she'll say:

"I will return home and speak with King Fahara'jad. I hope we can now focus on the loss of the one we loved rather than the crime that took her life.
Time heals all wounds, or so they say."

After meeting her in Stormhaven, she can later be met in Sentinel where she mourns Lakana with the crowd.

"I didn't think I'd see you again. Duchess Lakana's remains have been consecrated. Her rites have finished. Soon, she'll be moved to the royal tomb.
Now the populace can gather to mourn Sentinel's favorite daughter. I must mourn my friend."
How are you holding up?
"That's an odd question. I've known the duchess since we were children. We grew up together.
Now she's dead. Nothing will ever fill the hole in my heart.
I'll take some comfort in seeing her here at home with her family. It's where she needs to be."