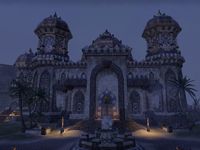 Sentinel Palace is the palace of King Fahara'jad in Sentinel. A safebox can be found in the back left alcove. There is a garden behind the palace, which the king encourages all of his associates to relax in. Several goats graze there, and a dog wanders near the fountain. Turaman and Mehfa are located here. A funeral is being held for Duchess Lakana in the courtyard north of the palace.

A dog is sniffing beneath one of the tables. The dog occasionally sits by the railing. Straight ahead, two monkeys are sitting across from each other at a dining table.

*The presence of this NPC here is quest-related.