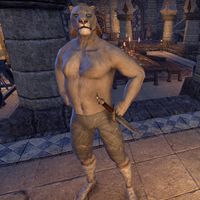 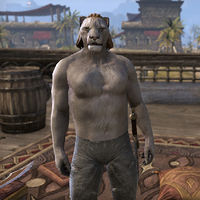 Master Kasan is a Khajiit who can initially be found on the deck of Captain Kaleen's ship, The Spearhead, in Port Hunding. He was Kaleen's mentor and former owner of The Spearhead, and while he acknowledges that Kaleen is strong, capable, and independent, he fears that her obsession with King Fahara'jad and the Daggerfall Covenant clouds her judgement. He participates in a few quests on Stros M'Kai and Betnikh.

Aboard The Spearhead, you'll find him in meditation at the bow of the ship:

"Again, sailors flock to the Spearhead. For this, Kasan is thankful."
Who are you?

"Master Kasan is but a humble sailor, though others will tell you stories. Some whisper the name Kasan Five-Claw, Terror of the Seas.
Yet these are stories for children. We have better things to do with our time, yes?"

What can you tell me about the captain?

"Some call her the Duneripper's Daughter. Others the Forebear Witch. We, her loyal crew, call her Captain Kaleen.
She is a master sailor, though Kasan now wonders where her allegiance lies."
What do you mean?
"There is a Forebear King in Sentinel now. Fahara'jad. He has allied himself with the Bretons and Orcs in this "Daggerfall Covenant."
Kasan fears his apprentice thinks much of Fahara'jad. Too much. A true sea-rover has no such loyalties."
Captain Kaleen is your apprentice?
"Kasan taught Kaleen much, though she is her own woman, strong and proud. Kasan is grateful to help her find her way.
She is a worthy successor. All that was once Kasan's is now hers."

Once you arrive on Betnikh, you'll find Master Kasan fishing off the pier:

"We have sailed often to Betnikh these last years. Chief Tazgol is a gracious host. In many ways, this is my second home."

Before speaking to the Ayleid Spirits and unlocking the ruin, you'll find him waiting outside the door:

"We are ready to attack. We await only your success with the door."

Once you've convinced the spirits to let you in, the forces on the door will disappear:

Inside the Ayleid Sanctuary, you'll find Master Kasan among some dead Bloodthorn Cultists:

"The others have gone on ahead. I delayed here to discourage pursuit."
Are the others far?
"Only a little ways ahead. We will be waiting for you."
Best of luck, Kasan!

Defeat Vardan and you'll return to the mortal realm to witness a schism among the crew:

If you decide to keep the relic, he'll only say:

"I cannot sail with someone who willingly dooms enemies to such a fate."

If you decide to banish the relic, he'll comfort you:

"Your choice is the right one. Do not dwell on it."

Kasan will be on the upper deck at his usual meditation spot. If you kept the relic:

"Your decision at Carzog's Demise will affect this world greatly, for good or for ill. Kasan fears the relic will bring more destruction than good. Even so, it was your decision.
Travel safely."

"By destroying the relic, you have saved the world from a great evil. Kasan's apprentice does not agree, but she has lost her way. This one can only hope she one day returns to the true path.
Go safely, friend."

What Master Kasan says when he is met again in Wayrest, if the player didn't agree with Captain Kaleen in Carzog's Demise.

"You are brave to face Kaleen once more. I am glad you have come. She needs more around her who are not blinded by patriotism."
Is she still angry about the destruction of the relic?
"Indeed. The Aldmeri assault on Daggerfall did nothing to ease her feelings. She still believes that relic could have been of use.

Even if she is right, it needed to be destroyed. The power to consume souls should not exist."
If you disagree with her decision, why are you still here?
"There is no mystery. Kaleen is still my responsibility. She faces many enemies in this time of war.

As her mentor, I will fight beside her until we both die."

If the player did agree with Kaleen in Carzog's Demise:

"Why have you come to Captain Kaleen's ship?"
I'm visiting the crew.
"This one will not begrudge you that. Your heroism on Betnikh was impressive. Still, I can't say your choice was wise."
What about you, Kasan? Why are you still here?
"We disagree. This does not justify abandoning Kaleen. We have been through too much to split over such an issue.
She faces many enemies in this time of war. As her mentor, I will fight beside her until we both die."

Master Kasan can be found in the Fighters Guild in Sentinel catching up with an old friend.

"This one greets you, five-clawed walker. Your reputation grows."
What brings you to the Fighters Guild, Kasan?
"An old friend. Years ago, when Kasan Five-Claw captained the Spearhead, Hareld Falvo was one who hunted my kind.
It is good to see him alive and well after all this time."
Good? Didn't you say he hunted you?
"There are smugglers, and there are those who hunt them. This is the way of things. Falvo was among the more respectable, and we owe each other much."
How so?
"Kasan was once marooned on an island. Let us say a few unclawed kittens took exception to this one's success. They also had the temerity to sink Falvo's ship."
And he survived?
"We both did, by working together. When we finally left the island, we agreed to a new relationship.
After the island, we were no longer hunter and hunted. We were friends."

This Elder Scrolls Online-related article is a stub. You can help by expanding it.
Retrieved from "https://en.uesp.net/w/index.php?title=Online:Master_Kasan&oldid=2491855"
Last edited on 18 September 2021, at 04:40