The Alik'r Desert is a region along the northern coast of Hammerfell. Inland it is an arid wasteland, and beneath the sands lie ancient ruins ripe for plunder; but there are also many dangerous creatures waiting to pounce on the unwary adventurer. Despite the harsh conditions there are some successful settlements in the area, notably Sentinel and Bergama.

Life in the desert is tough, but there are many nomadic tribes who live in and with the Alik'r, moving with the desert onto their next meal. These tribes are well-versed in the hiding places of the creatures of the desert, and have ingenious contraptions for collecting water (such as the simply named "desert water catcher" used for catching the morning dew).

When preparing to travel the Alik'r you are well advised to fully cover the body, to protect from sunburn and the occasional sandstorm. Locally treated and designed leather armor is advised as it has been honed to suit the conditions of the desert. It covers the whole body, with cloth patches to allow the skin to breathe, and also provides protection against the creatures of the desert.

Myrkwasa is the western region of the Alik'r, stretching from Sentinel in the north to the seasonal Ash'abah camp of Morwha's Bounty in the south. To the east, the desert dunes roll past the Goat's Head Oasis and the ancient Yokudan ruin of Tu'whacca's Throne into the expansive central region of the Hollow Wastes. The region is the site of the ancient Redguard training grounds at Leki's Blade, as well as the Aswala Stables, breeders of the famous Yokudan Charger. The port city of Tava's Blessing on the north coast is the site of the Redguard naval shipyards. In the east, the Rocky outcrops of Tigonus dot the landscape between the cities of Kozanset and Satakalaam, and the historic Yokudan site at HoonDing's Watch. Local authorities are investigating reports of the Withered Hand necromancer cult and the Imperial Seventh Legion being sighted in the region. 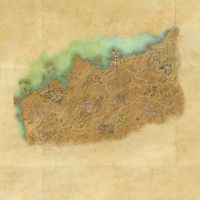 A map of the Alik'r Desert