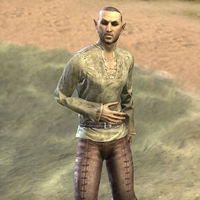 Telonil is a High Elf who is found on Stros M'Kai. He was quartermaster on the ship, the Maiden's Breath, however the ship was wrecked by the Sea Drakes and Captains Lerisa's crew was kidnapped. He later joins The Spearhead's crew with his captain. In his past, he was exiled from the Summerset Isles.

As you near Saintsport, you'll hear Telonil screaming for help "I need help, help!"

"Help me! They're after me!"
What's the problem?
"The Sea Drakes! When it gets foggy, like last night, they play tricks with the lighthouse, lure ships aground.
The Maiden's Breath—my ship—they lured us in and wrecked us."
Where's the rest of your crew?
"Drowned or captured. Captain Lerisa's looking for them. You heard of Crafty Lerisa, right?
Anyway, I'm through. No more sailing for me. You want to find the captain, just look for her monkey, Howler."
Find the Monkey. Got it.

On the beach, after rescuing everyone, he'll say:

"I thought they were all dead. Glad to find it isn't so."

If Like Moths to a Candle is completed before leaving Stros M'Kai on the Spearhead, Telonil can be found below deck.

"Ah! Don't sneak up on me."
What did you do on the Maiden's Breath?
"I was a quartermaster. I made sure we had the supplies and equipment to do whatever Lerisa wanted."
Do you miss it?
"For now. But Captain Lerisa is hoping to get her own ship again. We'll see how things go in Betnikh.

Once you arrive on Betnikh, you'll find him ashore near Varinus' stall:

"The quality of Orcish arms and armor are excellent, but their other goods …"

"I'll never admit this to Captain Lerisa, but I think you did the right thing. A Breton king as ambitious as Emeric should not be handed that kind of power."

If you let Captain Kaleen keep it:

"I never thought I'd say this, but I think Lerisa has it wrong.
Bretons can't be trusted with an artifact of that power. You should have destroyed it."

Telonil can be found aboard the Spearhead. You startle him as he's controlling the shipment.

"Oh! Don't do that. Don't sneak up on me.
What's this? What am I doing? I'm checking the manifests, of course. As if I would steal something."

"Oh, it's my dear, brave friend from Stros M'Kai. What a pleasure to see you again."
You seem to be in a good mood.
"And why wouldn't I be? Captain Kaleen's new venture as a privateer for King Fahara'jad is making us all the gold we need. Who knew war could be so profitable?"
Aren't you fighting Elves, though?
"A reasonable question. If my fellows hadn't exiled me from the Summerset Isles, I suppose I might feel a bit conflicted."
You were exiled from your home?
"Oh yes, and for reasons quite unfair to all parties involved. Best not to dig into it too deeply. Old memories.
Suffice to say, Captain Kaleen does the killing and I do the counting. Of coins, I mean."

He can be found in the marketplace alongside Irien.

"Once again, well met. I hope you are enjoying the warm air of Sentinel. I find it quite bracing, myself."
What brings you to Sentinel?

"A contract. Specifically, signing one. I recently had the pleasure of purchasing Captain Lerisa's newest vessel, the Maiden's Sigh.
Yes, you heard correctly. We have a ship again. The open sea is ours."

Are you working with Irien?

"No, I do enjoy her company. She is a delightful woman, far too good for Jakarn. Irien has quite a talent with coin, as do I.
Perhaps, if we both make port again soon, we will compare notes."

This Elder Scrolls Online-related article is a stub. You can help by expanding it.
Retrieved from "https://en.uesp.net/w/index.php?title=Online:Telonil&oldid=2489816"
Last edited on 12 September 2021, at 21:37