The Council of Province Generals has ordered an investigation into the death of the former Guildmaster, Jofnir Iceblade.

When you have reached Fighters Guild Rank 4 and are near the Guildhall in any city, a courier will run up to you. You need to talk to the courier to begin the quest. Merric at-Aswala asks you to meet him in the Fighters Guild. The investigation into Jofnir Iceblade's death is beginning.

Talk to Merric. The strange people around him are the Council of Province Generals, who run the guild under the guildmaster's supervision. They feel you and Aelif need to investigate Jofnir's death. He sends you to talk to Aelif outside.

Your first step is to investigate Jofnir's quarters.

Inside Jofnir's house, there are a few items you can examine:

A Soul Gem
<This Soul Gem is dark, empty. It still carries smears of encrusted dust, hinting at its age.>

A Dwarven Gear
<This gear resembles the ones from Mzeneldt. It shows signs of having been recently cleaned. You can make out inscriptions around the central wheel, but you don't recognize the language.>

A Backpack
<This backpack is filled with Dwarven artifacts: gears, struts, and other unrecognizable parts. You catch a glimpse of soul gem fragments at the bottom of the pack.>

While these hint at his hobby of delving into Dwemer ruins, the real prized is Jofnir's Journal. He mentions that he was going to visit Ragnthar and that he "couldn't let [it] go on any longer."

Tell Aelif what you found. The journal mentions Jofnir stopped at a minor city to pick up supplies before heading to Ragnthar. You agree to meet Aelif there.

This is an optional part of the quest. One is outside the guildhall in the minor city. She says Jofnir visited often in the months before he died. Inside the guildhall, talk to Akhita. The former guild master had her set out supplies for his expeditions to Ragnthar, an old Dwemer ruin. The ruin exists outside of time and space, according to some mages. The final person you need to talk to is also inside the guildhall. He wonders what Jofnir would think of the guild fighting Daedra and Dark Anchors.

Talk to Aelif, then follow her to Ragnthar. Talk to Aelif after you two find the door. Aelif will use her magical skills to focus the door and allow both of you to enter.

The mist around the door clears and you enter Ragnthar.

Head east into the large room, and try to search the skeletal remains in its center. When you approach, you are thrown back, and the skeleton is shrouded in golden light from four crystals.

Talk to Aelif. She knows a spell to negate the barrier. Wait for her to cast the spell, then destroy each of the four crystals. You have a short time to do this, but you can always start again by asking her to cast the spell again--although the crystals reset. There is no order to destroy them in; just run up and activate them.

Examine the skeletal remains after the barrier is down. They are the bones of a Nord, and there is a guild insignia in its ribcage. You take the insignia and hear a strange noise. It's a trap. Defeat the enemies, then talk to Aelif.

She says the insignia belonged to Jofnir. Aelif will try to summon Jofnir's spirit, now that the barrier keeping him in is gone, so he can tell you himself what happened. 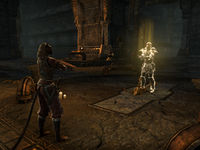 "Aelif demands the name of your murderer. Who killed you, Jofnir?"
"It was the Argonian, my subordinate, Sees-All-Colors."

Talk to Aelif. She tells you to find Merric and the council. They need to know about this.

Return to the Fighters guildhall where you talked to Merric at the beginning of this quest. He is shocked that Aelif would use necromancy and dark magic, but this is the evidence the council needed. He asks you to keep in touch and gives you Aelif's Shadowband and some gold.

This Elder Scrolls Online-related article is a stub. You can help by expanding it.
Retrieved from "https://en.uesp.net/w/index.php?title=Online:Proving_the_Deed&oldid=2153412"
Last edited on 21 May 2020, at 10:04