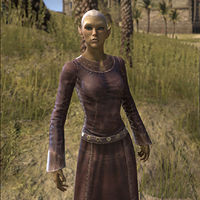 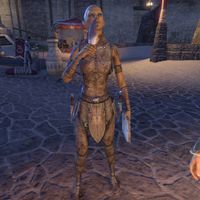 Irien is a High Elf who is found across the water from the Grave on Stros M'Kai. When you first encounter her, she is fretting about Jakarn, who has gotten himself imprisoned. She will later follow him as a member of Captain Kaleen's crew and then eventually join Lambur's crew, enjoying life at sea.

Irien appears to always keep an eye on Jakarn due to him sleeping with other women. If you destroyed the Relic in Carzog's Demise, she will also state that you have made the right choice to destroy it, for a power like that cannot be in anyone's hands.

As you approach her, she will exclaim "Jakarn is innocent!" to Moglurkgul.

"My poor Jakarn! I don't want to think about what they're doing to him down there. He's a Prince! He doesn't belong in the Grave."

Alternatively, if Jakarn's quest is the second to be in progress, she will say:

"Headsman Bhosek threw my sweet Jakarn into the Grave!"
Your Jakarn was buried?
"No, no. The Grave is the prison in that cave ahead. Jakarn described it as a ghastly place. Traps block the exit and most criminals roam freely inside.
Bhosek accused him of stealing a gem and this Orc monster threw him in."
Did he steal this gem?
"Gods no, he's rich! He's a prince from Glenumbra.
He promised to whisk me away from my family and make me his princess. But now he's going to die in the Grave, while I'm forced to return home."
I'll see what I can do.
"Jakarn said the gate in that cave is never locked because no one ever makes it past the traps."
Why do they call it the Grave?

"It's beneath the palace and anyone thrown in dies there. Jakarn said the guards are brutal and the other prisoners are worse."
Can't he escape?
"Traps, guards, and other prisoners prevent that. Jakarn said there are rows and rows of traps. And everyone down there, except for Jakarn, is a vicious murderer. No one's ever gotten out. My poor Jakarn!"

You said Jakarn is a prince?

"Yes, from Westtry. How I long to travel there with him. He described it as bright, beautiful, and full of life."

Aren't you worried about ruining your dress?

"What kind of a question is that? My true love has been cast into a dark pit to die. If I thought I could get past the traps, I would go in after him. I can always buy another dress."

After helping Jakarn in his adventure, on your way to meet up with him at the Screaming Mermaid, you'll run into Irien leaving the tavern in tears:

Speak to her and she'll tell you:

"If you're looking for that bastard Jakarn, he's at the tavern with a Redguard girl."
What happened?
"I overheard him telling a Redguard girl he'd whisk her off to Sentinel. That he was a ship captain. She swooned like a fool. Like I did.
I'd tell the Headman where he's hiding if I didn't hate the Headman more. I need off this island."

After completing Tip of the Spearhead, you'll find Irien on board the Spearhead waiting to leave for Betnikh:

"What do you want?"
You're sailing with us?
"Of course. I'll pull my weight, unlike Jakarn.
He's not getting near another woman until I'm too old to stop him, and we Altmer live a very long time."

Once you arrive in Betnikh, you'll find Irien ashore, perturbed once again:

"Curse Jakarn! How does he slip about so easily? I turn my back for one moment and he's gone.
He's probably off with those slatterns from Stros M'Kai. If I find any of them, it won't be pretty."

If you allowed the Captain to keep the relic:

"While I respect your heroism at Carzog's Demise, I cannot endorse your decision to keep that terrible relic. For once, Jakarn and I agree on something"

"For what it's worth, I think you did the right thing, destroying that relic. Magic that powerful should not be in the hands of Men."
You're sailing with us?
"Of course. I'll pull my weight, unlike Jakarn.
'He's not getting near another woman until I'm too old to stop him, and we Altmer live a very long time."

"This is actually quite fun. Look at him squirm."

"Well, now. What brings you to our humble abode?"
You're sailing on this ship now? What happened to the Spearhead?
"I joined Kaleen just to make Jakarn miserable, but I found I rather like the sea. It's not a bad life.
I won't fight against my countrymen, but Captain Marck isn't involved in the war against the Altmer. I'm happy here."

When you arrive in Sentinel, you will find the docks overrun with undead. Irien can be found aboard the Dawn Posset ready to defend it.

"Someone needs to deal with whatever's happened on these docks, and you're the one I'd trust to do it. Get out there.
We'll be fine. I'll have bandages ready in case anyone is wounded."

Afterwards she can be found in the Sentinel market street with Telonil.

"I've never been to a market like this. It's so … quaint. Redguards are remarkably polite, considering the war.
You did well on the docks. Quite well indeed."
What brings you to the market?

"Restocking the Dawn Posset's stores. Captain Marck has often remarked upon my talent for coin and counting. He also trusts me not to run off with his gold.
The selection is a bit dry, but we will make due [sic]."'

Are you happy to see Telonil again?

"It is nice to speak to a fellow mer. Perhaps if there were more of us outside the Dominion and less inside, we would not be having this war.
Telonil is a gentleman, and his suggestions have born fruit. I am glad for his company."

This Elder Scrolls Online-related article is a stub. You can help by expanding it.
Retrieved from "https://en.uesp.net/w/index.php?title=Online:Irien&oldid=2491869"
Last edited on 18 September 2021, at 05:45