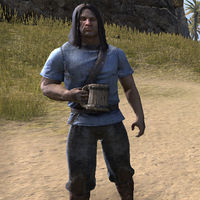 Haerdun is a proud Redguard who is found in Saintsport. He is a member of Crafty Lerisa's crew, and has been captured by the Sea Drakes. He claims along with other Redguards a distrust and dislike against Orcs.

Likes Moths to a CandleEdit 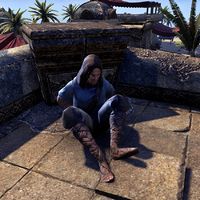 After agreeing to help Lerisa, you'll find Heardun in the upper floor of a building on the north side of town.

"Another torturer from Helane, even uglier than the last one."

If he was rescued as the second person, he will alternatively say:

"Choke and die, Sea Drake! I'll spit on your grave."
Lerisa sent me. I've got a disguise you can use to escape.
"I knew she wouldn't leave me to rot! Quick, untie me!
The Sea Drakes spent the past few hours breaking my fingers. I can't wield a sword, but I can still strangle a few on my way out."
Let me untie you.

Just before he jumps off the balcony, he'll tell you:

Haerdon : "These Sea Drakes give pirates a bad name. Kill every last one of them you see!"

On the beach he'll say:

"I may have only five working fingers, but that's enough to hold a mug."

If Like Moths to a Candle is completed before leaving Stros M'Kai on the Spearhead, he can be found below deck.

"I can't hold a sword yet, but I can hold a book. Perhaps I should find a book that will teach me to fight with my left hand!"

Once you've arrived in Betnikh, Haerdun will be on the main deck next to Captain Kaleen:

"I respect the captain, but I won't set foot on an island full of Orcs."
What do you have against Orcs?
"I've heard all the talk about the Daggerfall Covenant. Captain Kaleen mentions it enough. Orcs, Redguards, and Bretons in a grand alliance.
My ancestors fought at Orsinium. Many died fighting the Orcs. I respect them, but I'll never trust them."
What about Mekag?
"Lerisa's choice, not mine. That said, Mekag's not bad, for an Orc.
But I'm not setting foot on an island full of them. Especially not a clan that's refused to join the Covenant!"

If you chose to destroy the relic:

"You should have listened to Captain Kaleen. She was right about the artifact."

If you chose to keep the relic:

"You made the right decision. Our homeland is safer with that artifact than without it."

He'll be sitting in a cot below deck:

"I think my hand's starting to heal. One day, I'll going back to Stros M'kai to take my venegeance on those Sea Drakes.
Onsi watch over you, my friend."

"My friend, good to see you! See this hand? It works again. Found a very talented healer in Aldcroft who put the bones right back together.
I've put my sword through a few Elves since. Felt good."

Haerdun can be found alongside Ellashana, mourning Duchess Lakana in Sentinel.

"Have you come to pay your respects? If so, I thank you. I am glad to see you here.
No man should lose his daughter, least of all a king. It is a sad day for Sentinel, but Lakana lives on. She lives now in our hearts."

This Elder Scrolls Online-related article is a stub. You can help by expanding it.
Retrieved from "https://en.uesp.net/w/index.php?title=Online:Haerdun&oldid=2491879"
Last edited on 18 September 2021, at 05:57