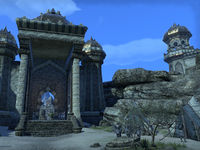 The Ash'abah are a group of Redguards who are pariahs from the rest of society due to their delegated role: fighting the undead.

In Redguard culture, desecrating honored ancestors is considered the worst action imaginable and brings Tu'whacca's curse upon the family of anyone who takes up arms against risen dead. For this reason, necromancers have historically targeted the Alik'r Desert. The Ash'abah were created to fight back, at a cost: they are hated by other Redguards, and exiled to Morwha's Bounty south of Sentinel. When the dead rise, the Ash'abah are called upon to help, but otherwise they are shunned. For more historical information on the Ash'abah, see the lore article.

As part of the Daggerfall Covenant questline, you become Ash'abah and walk in the footsteps of the first: a prince of Alik'r.