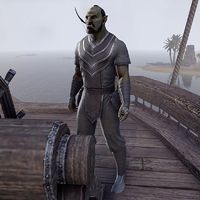 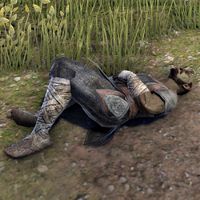 Ghash is an Orc sailor and a member Captain Albert Marck's crew. He can be encountered at Steelheart Moorings and later found on The Dawn Posset moored at Sentinel Docks. He does not appear in Sentinel until Risen From the Depths is complete.

He is first encountered when being rescued during Divert and Deliver. He may say any of the following:

"It was … it was Ma'jhad Kha. He saw me trying to escape … I thought he had me, but then Elvira stepped in ….
That's girl's got sand, but she's no match for Ma'jhad Kha. He dragged her off toward the beach. You have to help her."
What about you?
"Bah! He got me, but it's not bad. Just need to get my bearings and I'll be fine.
Go after Elvira. I couldn't live with myself if that monster Ma'jhad killed her."

Speak to him again before leaving and he'll urge you on your task: