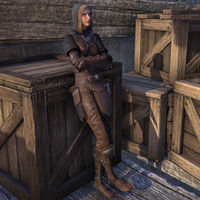 After you've completed Filling the Void, Amelie will appear inside the Dark Brotherhood Sanctuary, wearing the Brotherhood initiate clothes, so it's apparent that she, too has succeeded in her quest to join the guild.

You can find Amelie Crowe inside any Outlaws Refuge, where she will call you over to her as you approach, "Psst! Over here!"

"This place is nice, but it's not a home. It feels like I'm hiding down here. People like us, we need powerful friends if we're going to make it in this world."
People like us?
"Don't play coy. I see it in your eyes. You've killed people. Or you will. You've got the same urges as I do.
Just between us, I hear the Dark Brotherhood is recruiting for some new blood. I'm going to try my best to get their attention."
The Dark Brotherhood?
"You never heard of Tamriel's most elite guild of assassins? Rumor has it that if you take an innocent life and they notice, they'll offer you a place in the Dark Brotherhood. There, killers are free to pursue their true passion.
Think about it."
Thanks for the information.
"Word of advice. Urges aside, the Dark Brotherhood prefers to keep a low profile. Just remember—kill an innocent, get noticed.
My sources say they're recruiting in Anvil, on the Gold Coast. I'll be at the docks there if you want to talk some more."

If you instead meet up with Amelie at the Anvil docks, she'll ask,

"Is it time? Has the Dark Brotherhood finally noticed my impeccable work? I'm ready, dark one! I swear, in the name of—wait, I should let you talk first."
What are you talking about?
"Nothing. Nevermind. I thought you were someone else, that's all. Forget I said anything.
It's just … there's something about your eyes. They have a certain look about them. I thought you were … well, I thought you were one of them."
One of them? You thought I was one of the Dark Brotherhood, didn't you?
"Keep your voice down! But yes, I thought you were with the Brotherhood. You've got that look in your eyes. You killed people. Or you will.
Just between us, I heard the Brotherhood seeks new recruits. I plan to be one of those lucky few."
How do you plan to get the attention of a secret group of assassins?
"Rumor has it that if you take an innocent life and the Dark Brotherhood notices, they'll offer you a place in their guild.
Think about it. A place where killers are free to pursue their darkest passions. Doesn't it just give you the chills?"
I don't know. It sounds kind of risky.
"No risk, no reward, my aunt Ophelia always said.
Look, people like us, we need to surround ourselves with like-minded allies. People that will protect us and help us reach our true potential. They're going to notice me, I just know it!"

You then have the option to ask her more about the Dark Brotherhood and how to gain their attention,

You want me to just go up and kill a random person in cold blood?
"I don't want you to do anything. I'm just providing information. Letting you know that new opportunities are available if you're willing to spill a little blood."

You're rather open and nonchalant about this.
"Don't take my willingness to help out as a sign or anything. I recognized a kindred spirit and suggested a way to satisfy your darkest urges. They'll get you killed if you don't keep them under control. And if you don't find the right allies."

You're wrong. And possibly insane.

"No need to be all insulting about it. Just remember that I understand. That mask you wear every day. The one you're desperately afraid is going to slip one day. You could throw that mask away in the Brotherhood. They want you for who you really are."

I've killed before. Why hasn't the Dark Brotherhood contacted me already?

"Hey, I don't know exactly how they select new recruits. I'm just telling you what I've heard. Maybe you just need to be in the right place at the right time. Like Anvil. Of course, I've also heard they have eyes everywhere, so what do I know?"

How do you know so much about a secret organization of assassins?
"That's one of the best things about the Dark Brotherhood. It hides in plain sight. No one knows where its headquarters is our how many members it has. Yet you can go into any library and read a book about them. It's brilliant, really!"

You've read a book about the Dark Brotherhood?
"Quite a few, actually. My favorite is "The Night Mother's Truth." It describes the origins of the Brotherhood, although it might all be theory and conjecture. But forget the books! Everyone knows the Brotherhood exists. And most people fear them."

What are the benefits of joining a group like that?
"Fellowship, safety, and security, to name just a few. I understand there's also a steady flow of gold from all the contracts. And you get to kill people! Can you imagine a better guild to belong to? Better than picking pockets, if you ask me."

But why do you think the Dark Brotherhood is looking for recruits?
"Oh, I got that from Margog the Hammer. Buy him a couple of ales and he spouts secrets like a bard spouts poetry. Just the other day, he told me that his cousin Krusk killed a baker in Anvil. He received a mysterious visit that very night."

A mysterious visit?
"You really don't know anything about the Brotherhood, do you? If they decide you're worthy enough to receive an invitation, one of their dark dignitaries shows up to deliver the news in person. It's kind of creepy, but it's also a singular honor."

After you have become a Silencer, Amelie can be found inside the living quarters of the Sanctuary. 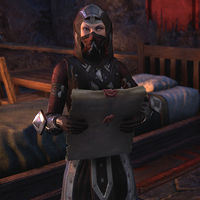 When you speak to her, she will greet you.

"It's good to see you again, friend!"
"I trust your contracts have been abundant and lucrative?"
Do I know you?
"You don't remember me, do you? We ran into each other on the streets of Anvil some time back, when it seems both of us were looking to attract the attention of the Dark Brotherhood."
<Remain silent.>

"Yes! That's it! I love that, don't you? The silence that fills the void where words should be. It's positively pregnant with menace. The effect it has on people is unmistakable."
<Remain silent.>

"I should probably be cursing your name, you know. I'd been trying to grab their attention for days, and then you arrived to haunt the Gold Coast like some malignant wraith. I had to redouble my efforts."

"I should probably be cursing your name, you know. I'd been trying to grab their attention for days, and then you arrived to haunt the Gold Coast like some malignant wraith. I had to redouble my efforts."

Either way you can ask:

How many people did you kill, exactly?
"Hmm, let's see. I kept a list. La, da, da, da, da … looks like thirteen."
You murdered thirteen people just to get the attention of the Speaker?
"That's how it's done, isn't it? Death is our business, and business is good. I'm quoting the Matron, of course."

You can respond in two ways:

"There it is again! Makes my blood run absolutely cold. You're magnificent at the silence thing!"
You're absolutely insane.

That's not how this works. You should be more discreet.

"You think so? I suppose you would know, the way I hear it you're the Sanctuary's new darling. I'll consider what you said."
Good. This is obedient duty, not murderous playtime.

Regardless, she'll finish the conversation by saying:

"Sure, sure. Well, I'd best be off. May the Dread Father guide your blade."