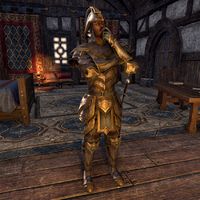 General Thoda is a Redguard who can initially be found at his house in Alcaire Castle. He is also a trusted advisor of King Faharaj'ad, acting as the general of his army.

After defeating his soldiers in combat, General Thoda is willing to speak.

"Hm. You don't look so dangerous. Yet, you waltz into my camp and pick fights with my soldiers?
Tell me why I should not simply cut off your head where you stand?"
Because Duchess Lakana sent me.
"The Princess? She is all right then...that is good. King Fahara'jad sent me to protect her, but there is little I can do from out here.
I do not wish to start a war, but I will if my king orders it. I await new orders even now."
Do you know who tried to poison her?
"Ah yes, indeed. The poison-maker was quite stubborn, but he spoke a name with his dying breath.
It means nothing to me though. He said 'Falhut'."
Dame Falhut? She's one of the Knights of the Flame.
"She is? Then she is in the castle?
Go then——quickly! Tell Lakana so that she may be prepared for this wench-assassin! I cannot go in, so you must protect her!"

Speak to him before returning to the castle, he'll add:

"Regardless of the outcome with this 'Dame Falhut', I do not believe it's safe for Lakana to remain in the Bretons' castle.
I will not break our treaty by ordering an attack, but neither will I leave until I am assured of her safety."

General Thoda can be found with his wife in his villa in Sentinel. He is dismayed to find that his downtime has been cut short.

If you have never met Thoda, he'll greet you with:

"So after three months of wasting time in Alcaire and three long days at sea, I finally return home. My chair, my wine, my wife, all here.
Please tell me you haven't come here to disturb me."

If you have met before, he'll say:

"You...I know you from Alcaire. You roughed up so many of my Bravos. Tamriel is a small place after all. I just returned from Alcaire myself. Back in my chair, drinking my wine with my wife....
Wait. Please tell me you're not here to disturb me?"

King Fahara'jad sent me. It's about the Withered Hand.
"No! You realize what this means? Not one moment of relaxation! Not one!
And damn it, I thought this talk about the Withered Hand was just a rumor. Are you sure this is true?"
Yes. They summoned undead to attack the docks.
"The Sentinel Docks? The nerve!
But it sounds like something those motherless dogs would do. I tell you, Uwafa and Alasan might just be more dangerous than their father."
Who are Uwafa and Alasan?
"Uwafa and Alasan are the sons of that old bastard Suturah. They're calling themselves the Withered Hand as a fear tactic.
I knew them when they were boys. They're the same age as Prince Azah...speaking of whom, we should inform him as well."
The king said Azah has been investigating the Withered Hand.
"Exactly. He knows more about this business than I do. That's for sure.
If you'll go round up the prince...I'll have to find some way to explain to my wife why I'm leaving again...then we can all meet at the palace."
Where can I find the prince?
"My guess is that he's with the girls at his seraglio by the north wall.
I know what you're thinking, but it's not because the prince is some kind of ladies' man. The girls help him gather information. Perhaps he'll already know what's happened."
I'll go look for him right away.

You can continue to question the General:

"My hope is that Prince Azah might have a lead on where Uwafa and Alasan have set up their headquarters, or better yet, what they're planning next.
Regardless, these are things we should discuss at the palace."
Does the prince know Uwafa and Alasan as well?
"We all do. Suturah was one of the king's viziers—kept his little hobby a secret.
Then one day, the king came to meet his viziers and found them all dead. The real surprise was when Suturah ordered their corpses to attack. That's how it started."
How did you know the sons though?
"I tried to train them in swordplay...Uwafa and Alasan, along with Prince Azah.
Those two had no interest though. I would always catch them torturing insects and animals. The Prince—he hated them, and they hated him right back."

General Thoda can be found beside King Fahara'jad in the palace after rescuing Prince, though he will chastise you for speaking to him before them king.

"You should always address the king when we're in the palace. That's not only the custom; it's a matter of respect."

After reporting to the king:

"I hope you realize what you've gotten yourself into. Once you're in Fahara'jad's inner circle, you'll never get a moment's rest.
I know this from personal experience."

He will also accompany the king to the doors of the Impervious Vault. After exploring the vaults:

"It took a brave soul to charge in there. I hope your courage was rewarded."

Once In Search of the Ash'abah has been started:

"I just hope the Ash'abah are prepared for this.
Regardless, I will discreetly begin looking through the ranks for any soldiers who might be willing to do what's necessary. That way, at least we have someone."

General Thoda can be found at the south entrance to Satakalaam which has been invaded by Imperial forces.

"Now here's one who I know is loyal to the king! It's good to see you again, my friend.
You're going to find this hard to believe, but the damned Imperials are here! They've seized control of the city——for the moment, at least."
Why have the Imperials attacked here?
"They're in league with the damned Withered Hand...! As if we didn't have enough necromancers to deal with already!
No matter what, we can't allow the Imperials to get a foothold here. We're going to take the city back and kill them, all of them."
Sounds like you have everything under control.
"Ha! I'm glad I have one of us fooled. The Imperial curs actually have one up on us. They're holding hostages and the king doesn't want their blood on his hands.
I need someone...unofficial...to go in and free the hostages. What do you say?"
I can free the hostages.
"Your loyalty to the crown will be rewarded, my friend. You have my word.
I can even make this easier for you. Wear this Imperial Armor, and you should be able to walk around the city unnoticed."

<Take Disguise>/All right. I'll take that disguise now. (Receive Imperial Disguise Item)
"Here you go. This should help you get around the city unnoticed while you're freeing the hostages.
"Be wary though, some of the Imperials may not be so easily fooled."
How do I find the hostages?
"There are four: Lord Zagari, Magistrate Govan, Shamone al-Sentinel, and Lady Moyaltha. I'll mark your map where they're being held.
The flea-bitten Imperials have blocked many of the ground level doors, so I suggest taking the bridges."

What if they kill the hostages?
"I don't think they will. The Imperials think strategically. They took the hostages to protect themselves, and they don't want to give that up.
If they do kill them, well then, that just means we can go ahead and attack."

When did the Imperials become allied with the Hand?
"Don't know exactly. Our spies in Cyrodiil knew nothing about it.
I suspect they've been in league all along though. Probably some necromancer treaty they all signed in blood or something. Either way, my blade doesn't discriminate."

Are the Imperials the greater threat now?
"Generally speaking, I'm sure they are, but I'm more concerned about the Withered Hand.
Those evil bastards won't rest until they've killed every last one of us. We can't fight the Imperials if we're all dead."

How are things in Sentinel? (Appears once disguise is taken)
"They've gone from bad to worse. Fahara'jad can't even go out in public without getting heckled.
Crazy as it sounds, the damn Crowns have people believing that if the king steps down, the Withered Hand problem will just go away."

We've recovered two of the Ansei Wards.
"I heard. Prince Azah's singing your praises all across the desert.
The Prince might be headed here soon. I hope so, and I hope the two of you can find that last Ansei Ward."

Once the smuggler tunnels have been collapse, General Thoda can be found within the city overseeing the recapturing of Satakalaam.

"Good work! Hostages came out and we attacked. Cut right through the bastards and scoured the city. Just a handful of Imperials holding out now.
I still haven't figured out how they got here though...I'm worried reinforcements may be on the way."
No need to worry. I collapsed the tunnel they were coming through.
"It was a tunnel? Huh. Does that mean they were coming from Bangkorai?
I guess that's a concern for another time. I'm damn glad you collapsed the tunnel though. I guess that's a good day's work for all of us!"

"There's more to be done, though. Always is, isn't there?
Prince Azah's here. He says they've tracked down the third Ansei Ward, and he wants you to join him as soon as possible at the Motalion Necropolis."
What's the Motalion Necropolis?
"It's a dark place——the largest necropolis in all Alik'r. It's just west of Satakalaam.
If the Withered Hand's there, I know the prince needs help. I'll send troops as soon as we're done in the city, but I suggest you join him now if you can."
I'll go to Motalion Necropolis right away.

General Thoda is one of the people gathered in the Vault to witness the restoration of the Ansei Wards.

"We're getting reports in from all over the desert. Withered Hand's crumbling fast.
We did it, my friend. We did it."