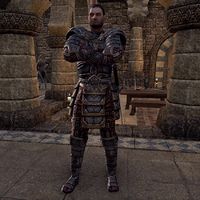 Hareld Falvo is an Imperial member of the Fighters Guild and the hall steward of the hall in Sentinel. He and Master Kasan have a history together. Kasan was a smuggler, and Hareld's job was to hunt smugglers. Once, Kasan was marooned on an island, and Hareld's ship was sunk. The pair survived by working together, and came out of the situation as friends.

If you're not in the guild, he'll recruit you.

What can you tell me about the Fighters Guild?
"Usually we'd be out pursuing various contracts. By the Eight, there's more than enough to do out here in the desert. But these days, our new hall steward has us working one big job.
We've focused all our resources on destroying the Daedric anchors."
Anchors?
"Yeah—huge chains falling out of the sky? A seasoned adventurer like you, I'm sure you've seen one.
From what I'm told, they're coming straight out of Oblivion, Wherever they hit, Daedra are sure to follow."
Sounds serious. Are you recruiting right now?
"Is a croc's arse watertight? Of course we're recruiting, provided you've got the skillset. From the looks of you I'd say you're an excellent candidate.
So what do you say? You in?"
I'm ready to join.
"Fair enough. Welcome to the guild, Associate.
Now it's just a matter of slaying as many Daedra as you can find. If you break some of those chains, there'll be a reward and maybe even some special assignments waiting for you when you return."

Speaking to him as a member of the guild:

"Hail and welcome, comrade. How goes the fight?"

Whether you're a member of the guild or not, you can ask him about the Ra-Netu prior to Rise of the Dead's completion. His greeting for when the Ra-Netu are active at the docks takes priority over the greetings related to your guild membership status.

"This business at the docks gets worse by the hour. If those shambling dungpiles come much farther up the beach we may have to do something about it."
Why isn't the Fighters Guild defending the docks?
"The Guild is subject to certain restrictions that don't apply to lone warriors like you."
What kind of restrictions?
"The most frustrating of all—politics and religion. Our Guildhall is not a permanent fixture here in Sentinel. We operate at the pleasure of the king and his viziers. They could make things difficult for us if they wanted to."
How's that?
"Let's take the case you brought up: if we began cutting down the Redguards' "honored dead," we'd face a public relations disaster. Recruitment would dry up, and we can't afford that. Fighting Daedra is something of a team sport."
I see what you mean.
"Welcome to the world of Stewardship. I need a drink."