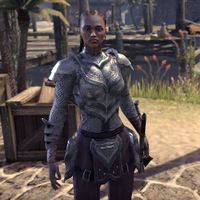 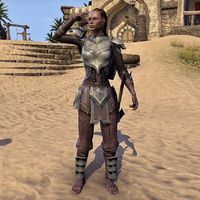 Watch Captain Zafira is a Redguard watch captain who can be found in Sentinel.

After you have slain Salmaran you can report to Zafira at the docks.

"The Ra-Netu have returned to the sea. The docks will soon smell of dead fish again instead of dead people.
And you! Right off the boat and you slay the necromancer? Surely Tu'whacca sent you to deliver us from this … difficult situation."
I'm glad I was able to help.
"I am too. It has been many years since the plague of necromancy visited our shores.
Though I am relieved the docks are clear, the events of this day are extremely disturbing."

After saving the Sentinel Docks, the Watch Captain will ask for you to report to the king.

"I wonder if you know how completely we are in your debt. Alik'r warriors fear no evil, but they will not fight the undead.
It may be a superstition but it has been tradition for centuries. I could not have convinced my guards to break it today."
Surely you were planning some kind of response?
"I'm afraid not. There was just no easy solution. Perhaps to call everyone inside the castle and lock the doors?
King Fahara'jad would not have liked that. Of course, the king will be extremely disturbed to her what has befallen here regardless."
The king doesn't know about the undead?
"I did not want to send word to the king until I was certain necromancy was involved. Now though, he should be informed right away.
I must stay here and oversee the cleanup. You are the one who turned the tide here. Will you inform the king as well?"
Yes. I can go speak to the king.

Once you agree to speak with Fahara'jad, you can ask some more questions.

"Thank you, seafarer.
It is better if I remain here to supervise as best I can, but I know the king would want to be informed of what has befallen us as soon as possible."
Can you explain your people's beliefs about the dead?
"The dead are sacred. It is what the people of Alik'r have always believed and always will.
Just as we respect our elders, so do we respect our ancestors. It would be dishonorable to strike them, and might even cause one to be cursed."

Shouldn't these superstitions be put to rest?

"Most people here deem this to be sacred law, not superstition. Even King Fahara'jad must respect our customs. If he were to ask his people to disrespect their ancestors, his rule would swiftly come to an end."

Haven't necromancers threatened Alik'r before?
"These dark arts are not practiced by our people, but yes, we hive experienced the plague of necromancy in the past.
Fighting these plagues has always required great sacrifice. Those who have fought the dead have been dishonored, cast out."

Cast out on the basis of superstition?
"Most people here deem this to be sacred law, not superstition. Even King Fahara'jad must respect our customs.
If he were to ask his people to disrespect their ancestors, his rule would swiftly come to an end."

If you speak to her after the quest, she says:

"If the plague of necromancy has truly returned, I fear the future may bring many dark days.
Someone will need to come forward to fight the risen dead."

Watch Captain Zafira is part of the honor guard present in the Impervious Vault during Restoring the Ansei Wards.

"Look at you. First you drive the risen dead from the Sentinel Docks, and then you drive them from all of Alik'r.

I must confess. I am impressed."