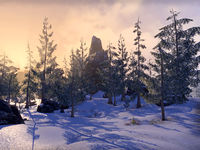 Bleakrock Isle is a small, barren island in the sea northwest of Morrowind, just to the south of Solstheim. Sparsely populated and far off any major trade routes, it is garrisoned by only a small Ebonheart Pact force to watch for enemy ships. Since the beginning of the Three Banners War, bandits began appearing in Bleakrock, and many citizens begun to carry around alabaster whistles to sound when they require aid.

The island is where Ebonheart Pact players begin their journey after escaping Coldharbour. Over the course of the Pact questline, you will assist Captain Rana in locating Bleakrock's missing villagers, and subsequently evacuating them in the wake of an attack by the Daggerfall Covenant.