Hallin's Stand is a city in southwestern Bangkorai. The Seventh Legion has taken over Hallin's Stand, and will occupy the city until the local objective is complete.

If you approach Hallin's Stand from the south, you'll have to enter the city through a closed door. Player housing in the form of Twin Arches is located outside the city, and is a short, convenient walk away from the southern door. Turning left after entering the southern gate brings to the Desert Sun Woodshop. The Home of Runid is located next door to the wood shop, just to the west. A warehouse lies east of the residence, and the Sublime Elixir is across the street from the home.

The western half of the city is separated from the eastern half by means of a wall and a ledge. The wealthy live here, and there are paths leading to the upper district via the street leading west of the Mages Guild and the street leading north away from the warehouse next to Runid's house. The upper district is also accessible by means of the various planks and boards propped between the roofs of several houses and the wall, as well as several wooden ramps in the alleyways between the buildings in the eastern district and the wall.

The Drowsy Owl tavern is in the northern corner of the upper district, and the At-Nimr Estate lies west of it. There is a ramp in front of the estate (on the left-hand side) that brings you onto the ledge overlooking the general store and a Seventh Legion officer's office. The Grandeya's Palace is the focal point of the upper district, and lies south of the estate. The palace is flanked to the north and south by watchtowers. A copy of the lorebook, The Lusty Argonian Maid, Vol. 2, is sitting on a table on the lower level of the southern watchtower. The stocks are directly in front of the palace.

Turning northeast after entering the southern gate leads you to the Magical Ring, an enchanter's store. The Home of Kathil is located next to the Magical Ring, just to the northwest. If you travel up the road north from the enchanter, you'll find the Fighters Guild on the east side of the street and the Yokudan Heritage House on the west side of the road. The two buildings are connected by a bridge leading between the buildings' roofs. A book titled Den of Thieves, Part Two is sat upon the bridge's railing, beside a drink. The Fountain Court Market lies just up the road to the north. The eastern gate is located at the market. Two drunkards are loitering beneath the eastern bridge leading into the city. There is a thieves trove next to them. If you haven't completed the local objective, you'll find Ayma at any of the gates leading into or out of the city. The Home of Aishah lies in the northwest corner of the market, and Septima Tharn's Office lies east of the residence. The two buildings are connected via a bridge from each others' roofs. Peasants wander the market while the Imperials are in town. 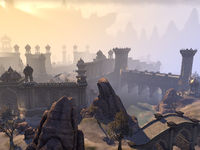 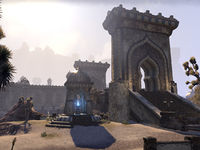 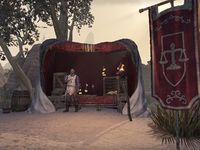 Hallin's Stand Wayshrine is located at the eastern end of the main bridge into the city. Glorgzorgo Loves Cheese, a guild kiosk run by Glorgzorgo, is nearby. 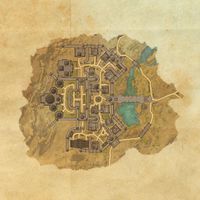 A map of Hallin's Stand