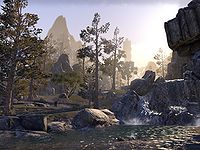 Places with a plus sign + on the icon are designed for groups of 2-4 players.

These locations were originally listed as Group Events, but now function similarly to normal Group Bosses.