Iluvamir (or Lluvamir; see notes) is the southern region of Auridon. It extends from the port city of Vulkhel Guard up to just past Phaer and Glister Vale in the north. The Iluvamir Dolmen sits in the southwestern area, northwest of Vulkhel Guard. The region of Calambar is to the north.

These side quests count towards the Auridon Adventurer achievement. For Dominion storyline quests which also contribute to this achievement, please see Auridon Quests. 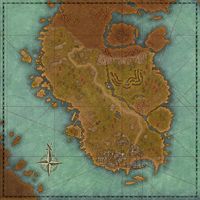