Online:The Will of the Woods

The princess of Evermore is being cared for in the Viridian Woods, but her future is uncertain.

Wyress Demara gives you the quest to meet the Viridian Sentinel at his altar, but she's unhappy about it. The Viridian Sentinel - an office whose holder chooses their successor - has saved Princess Elara's life, but may soon regret doing so. The Sentinel himself is part of an ancient pact, made before living memory, and most of the various Witch-Wyrds have made their peace with his existence: however, Demara is of the Glenmoril Wyrd, who were not party to the original pact, and would rather it did not continue (though they pursue this hostility right now only by argument and general non-cooperation.)

When you find the Viridian Sentinel's altar, on an island in the middle of a small lake, Princess Elara will be unconscious on it. She's already been reported dead, back in Evermore - this was why the old Captain at Evermore got demoted, because he failed to protect her - but the current Sentinel, Stenwick Gurles, has saved her life, just about. She's still unconscious, and the only way to give her enough energy to wake her up is to collect said energy from fairy rings. These rings are all nearby, but guarded by wolves and spriggans.

After collecting the fairy ring energy, you need to head over to Stenwick's hut. The hut is located down the road south of the lake. He creates a magic salve, and asks that you administer it to Princess Elara. She awakens when you do so, and you must speak with her. After your conversation, Wyress Demara appears from the woods. She and the Sentinel exchange words, then she transforms into a wolf and runs off.

Creating the salve left Stenwick rather weak, and the salve won't keep the princess healthy for long. He has another favor for you. Stenwick asks that you retrieve a bud from the wood's chief spriggan, the Voice of the Forest, who is older and wiser than the rest, and party to the pact. However, the bud in question must be freely given. 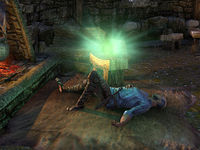 The Viridian Sentinel passes on

You can either run around the forest until you stumble into her little hideout (which is very difficult to find, surrounded by rocks and trees) or kill other spriggans and watch their souls fly back to their progenitor. The latter is obviously easier - but will also make her angrier when you meet her. Also, given how many wolves and spriggans there are in this forest, it's actually rather difficult to move *without* aggravating at least one spriggan, and then trying to run out of range from that one will probably put you in range of another, so you'll have to go pretty stealthy if you actually want to reach her without killing any spriggans (she doesn't mind you killing wolves, skeevers and trolls) Stenwick, as the guardian of nature, prefers the non-violent approach, Elara thinks you should kill at least one spriggan and follow its soul-motes to find the Voice as soon as possible.

When you find the Voice of the Forest, she's not happy about the Pact that her own progenitors made - laying out areas where man was allowed to have subjugated nature. Nevertheless, despite being hostile and uncooperative, if you have the Mages Guild Persuasion perk and have not killed any spriggans, you can persuade her directly to give you the bud anyway. Otherwise you're going to have to do her a favor by finding some spriggan-sprouts within a troll's offal.

Once the Voice gives you the bud, you'll need to head to the Wyress camp located east of Evermore. Speak with Wyress Demara, who is displeased that Elara wasn't the one who brought the bud to the Wyrd. When you get there, Demara clearly doesn't like what's going on. She'll fill you in on the rest of the story: Stenwick is in fact (if you haven't already guessed) choosing his successor as the Viridian Sentinel. The Wyrd considers Princess Elara to be untrained and unfit for the position, and in any case believe that it's time for the pact to end, to "allow the forest to grow free".

Further arguments will be interrupted by the arrival of Elara herself, who only now understands what's being asked of her: that the price for her life is her life, as Stenwick's apprentice and eventual replacement. She still apparently thinks Stenwick will be healed and she will have at least some time. Quarrels aside, you have the freely given spriggan bud, which requires a blessing. Speak with Wyress Demara to begin. Place the bud in the innards of the dead stag on the nearby stone altar. The Wyrd perform a ritual to bless the bud. Now, you must return to Stenwick.

When you get back to him, it's already too late: he's dying, and glad Elara isn't here to see him like this. Head out to the lake and perform the ritual to help Princess Elara become the next Viridian Sentinel. You have two options from here: to carry out Stenwick's dying wish, or to comply with the Voice of the Forest's will and burn the spriggan bud, killing Elara and setting the forest free from its pact. 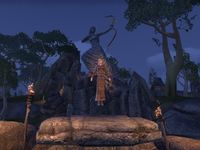 The Voice of the Forest appears on the altar, and tells you how to complete the ritual to make Princess Elara the next Viridian Sentinel. Lead Elara across the lake to gather the motes of power that float about the lake. Have her stand in the motes and wait for her to gather each one. The lake, however, is not without its defenses. There is an Ice Wraith, which is a tough enemy. It may or may not be possible to avoid it: it's certainly possible to collect enough motes without aggravating it, but getting back to the altar may be another matter.

If Elara takes on the power of the Viridian Sentinel, she will initially be overwhelmed by the power - and, wisely, follow up with a realization of just how much there still is for her to learn. The power she has been given comes with a great deal of responsibility. She rewards you for your assistance in the matter.

The Voice of the Forest also presents an alternative: to set the forest free of the pact that it is now less than willing to continue, by destroying the spriggan bud in one of the torches either side of the altar. If you do this, untamed Nature will take its course and Princess Elara will die of her old injuries - only becoming the Viridian Sentinel and continuing the pact will allow her to heal fully and continue to live.

This Elder Scrolls Online-related article is a stub. You can help by expanding it.
Retrieved from "https://en.uesp.net/w/index.php?title=Online:The_Will_of_the_Woods&oldid=2203647"
Last edited on 30 August 2020, at 01:37