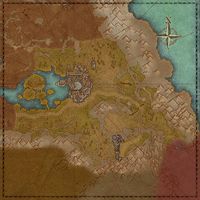 A map of the Smokefrost Peaks

Smokefrost Peaks is the southeastern region of the Rift. It is mainly dominated by the city of Riften and the lake to its west, but also features some high mountains to the southeast, including Trolhetta. Fullhelm Fort is a major settlement in the southeastern portion, near the pass into Stonefalls to the south. The Smokefrost Peaks Dolmen is located in the western part of the region, southwest of Riften. It is bordered by the Stony Basin to the north and the Ragged Hills to the west.

These side quests count towards the Rift Adventurer achievement. For Pact storyline quests which also contribute to this achievement, please see The Rift Quests.