Redolent Loam is the western region of Deshaan. This region includes the city of Narsis, as well as the towns of Muth Gnaar to the southeast and Serkamora to the northwest. The Redolent Loam Dolmen is near the center, northeast of Narsis. Stonefalls borders on the north, and Shadowfen lies to the south, though the only gate is farther west in Lagomere, which forms the eastern border. The region contains Lake Hlaalu, a body of water just north of Narsis.

These side quests count towards the Deshaan Adventurer achievement. For Pact storyline quests which also contribute to this achievement, please see Deshaan Quests. 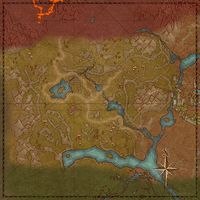 A map of Redolent Loam
Retrieved from "https://en.uesp.net/w/index.php?title=Online:Redolent_Loam&oldid=2398587"