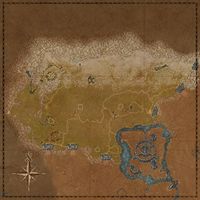 A map of Daggerfall Territory in Cyrodiil

The Daggerfall Territory in Cyrodiil initially comprises the northwesternmost regions. The six keeps that make up the initial defenses of the Daggerfall Covenant are all located here. In addition, the city of Bruma is in the northeastern portion, and the towns of Chorrol and Weye can be found in the south. The Imperial City lies across Lake Rumare to the southeast, but is inaccessible. The Aldmeri Territory is separated by a mountain range to the south on the western side, through which there are three gated passes. The Ebonheart Territory lies across another mountain range to the east, also with three gated passes.Swimming across Lake Rumare is inadvisable, as it is rife with Slaughterfish. There are three Dolmens here; Applewatch Wood Dolmen and Winter's Reach Dolmen are found in the north, and the Northwestern Shore Dolmen is on the shore of Lake Rumare in the south. 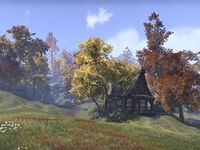 The Amber Woodland is located north of Fort Rayles. The region comprises rolling hills and rocky crags, as well as a high concentration of autumnal trees. A trail runs along the top of the western crag from Fort Rayles to Fort Warden. The ruins of Sancre Tor can be found in the southwest of this region, and Lipsand Tarn nestles in the western cliffs.

An inactive dolmen lies far south of Fort Warden Mine. There is a small bridge near Fort Rayles with a Frost Troll and a chest beneath it. 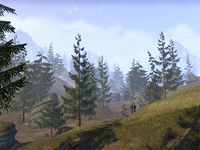 Anga Valley lies to the northeast of Bleaker's Outpost, and runs from the Sercen Hills in the west to Winter's Reach in the east. A road runs along the valley connecting the outpost to Horunn Milegate. The Ayleid ruin of Anga from which the valley gets its name sits on the northern slopes. Wolves wander the valley. 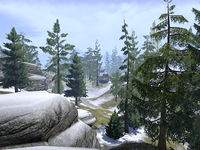 Applewatch Wood lies north of Fort Aleswell and west of Bruma. This largely wooded region sits on the snowline between the Heartlands and the Jerall Mountains and is dotted with rocky outcrops. Applewatch itself sits on the northern road between Bruma and the Warden Highlands. Two roads lead southwards towards the Orange Road above Fort Aleswell, which runs along the southern edge of the region. The Highlander Camp spans the western of these roads, and The Lover stone can be found just to the west of it. Applewatch Wood Dolmen is located between the camp and the Orange Road. Wolves prowl the hills. 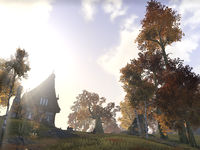 Autumn Range is situated between Fort Glademist and Fort Aleswell, and is a sparsely-wooded area of upland plains. The Orange Road from Chorrol to Bruma runs through the region, and the Ayleid ruins of Piukanda and Moranda can be found here. Underpall Cave sits in the northeast corner of the region. 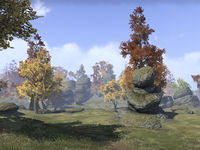 The Colovian Crags can be found in the southwest of the territory, south of Fort Rayles around the town of Chorrol. Littered with outcroppings and other rock formations, the region marks the edge of the Colovian Highlands. The Gate of Alma Ruma is located in the northwest of the area, from which roads run to Rayles, Chorrol, and beyond. Green Lake can be found in the south. 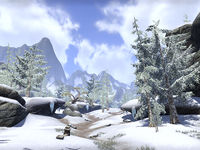 Echo Cliffs is a region in the north of the territory found northeast of Fort Warden. As part of the foothills of the Jeralls, the region is dotted with rocky escarpments and spurs. A road runs west to east through the western part of the region from Fort Warden past Zimar's Winery and on towards Bruma, while a second road leads north from Applewatch into the eastern section. Echo Cave can be found in the south of the region on the border of the Warden Highlands. 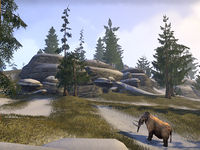 The Evergreen Crags are found to the east of Fort Dragonclaw. The northern part of the region is dominated by a large lake, while the southern crags are home to a number of mammoths. Beyond the crags, the region descends into Anga Valley, on the northern slopes of which sits Red Ruby Cave. 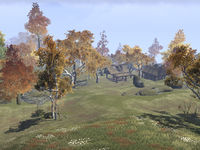 Glademist Fields can be found southwest of Fort Glademist. The region is sparsely wooded and contains a number of ruined buildings. A medium-sized Imperial Camp can be found just off the Orange Road from Chorrol. In the west of the region, Hrotanda Vale and the Shadowed Path Tower look down over Fort Rayles. The Mage Mundus Stone can be found in the north, nestled in the cliffs that mark the southern end of the Amber Woodland. 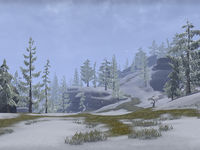 The Jerall Steps are located to the west of Fort Dragonclaw. Mostly open but for a few trees and rock formations, the Steps are dominated by Cloud Ruler Temple which sits on a high plateau northwest of Bruma. Capstone Cave and the Ayleid ruin Rielle can be found in the south of the region. 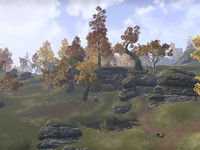 The Lonely Hills are situated north of Fort Ash. Mostly open apart from a few clusters of trees, the region contains a number of ruins, from burnt-out farmhouses and ruined keeps, to old Imperial forts like Coldcorn and Ayleid settlements such as Lindai. A small lake can be found in the southwest of the region, and The Thief stone lies in the east. 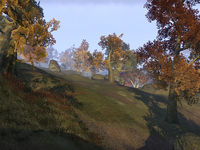 The Northern Shore of Lake Rumare runs from the border with the Ebonheart Territory in the east, past the ruins of Caractacus as far as the Northwestern Shore Dolmen. 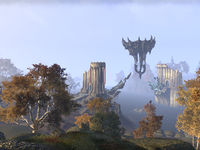 The Northwestern Shore of Lake Rumare runs from the eponymous dolmen at its eastern end, around to the village of Weye. The Red Ring Road cuts through the region on its way from Fort Ash in the south, through Empire Tower, and on towards Fort Aleswell in the north. A bridge to the Imperial City also leaves from the northwestern shore, but it is inaccessible due to the Daedric invasion. 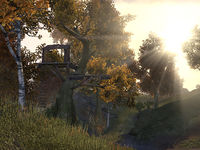 Sercen Hills is the region surrounding the Ayleid ruin of Sercen to the east of Fort Aleswell. It is a moderately-wooded area with numerous trails and tracks running between its hills. The Imperial Bleaker's Outpost is located in the region, but it has been commandeered by the Alliances as part of the ongoing Alliance War. The nearby village of Bleaker's Way has become overrun with giants. The Red Ring Road runs through the region from Aleswell in the west to the Chalman Milegate on the Ebonheart Territory border in the east. 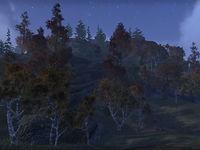 The Twilight Woods are a small wooded area north of Fort Glademist. Nestled in a secluded valley, the woods are also the location of the Ayleid ruin Ninendava. 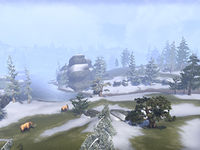 The Warden Highlands are located to the southeast of Fort Warden. The region is dominated by a large lake, on the shores of which sits Ice-Heart Home. Mammoths make their home in the southern crags, and a pass leads from the lake south towards the Twilight Woods. 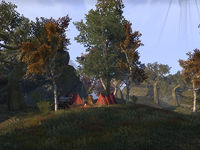 The Western Shore of Lake Rumare is the region around the village of Weye, and runs from there south to the Aldmeri Territory border. An entrance to the Imperial Sewers can be found in the trees behind the village. 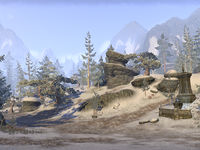 Winter's Reach is the northeasternmost region of the territory, and contains the Winter Gate into the Ebonheart Territory. The region is sparsely forested and contains numerous rocky outcrops which are home to mammoths. Winter's Reach Dolmen is located in the west, while a road leads down the eastern side from Winter Gate to Horunn Milegate.