Artaeum is a mystical island, home to the Psijic Order. It can be visited in the Summerset Chapter, and is linked to the Summerset zone guide.

The island was formerly part of the Summerset Isles, but disappeared 350 years ago around the time the Mages Guild was founded. It is very similar to the lush environment of Summerset, sharing much of the same flora and fauna. Mephala has taken interest in the island for uncertain reasons relating to the Daedric War Storyline. 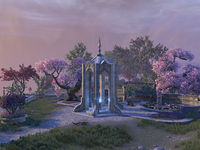 The Artaeum Wayshrine is located just a few paces south of the Ceporah Tower.

You will gain access to the wayshrine by completing the quest The Queen's Decree. If you want to get to Artaeum sooner, you can teleport to someone in your group or guild, or by exiting the Grand Psijic Villa player house. A chest can spawn just south of the wayshrine, behind the curved limestone wall.

This Elder Scrolls Online-related article is a stub. You can help by expanding it.
Retrieved from "https://en.uesp.net/w/index.php?title=Online:Artaeum&oldid=2666165"