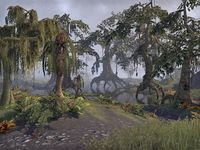 Shadowfen is the northwestern region of Black Marsh.

It is a fetid mire, often fought over by the Imperial Legion and Dunmer slavers. The ancient city of Stormhold is located here, the source of the devastating (to non-Argonians) Knahaten Flu. Local creatures include giant snakes, fleshflies and wamasu, and diseases such as blood rot, the droops, and swamp fever are quite common. Though the practice of Argonian slavery was abandoned when Black Marsh joined the Ebonheart Pact, rogue Dunmeri slave traders can still be found roaming the marshes. Hist trees and ruined temples can also be found along the winding channels and dank foliage.

The region borders Morrowind to the north, and Cyrodiil to the west. It is also home to the Shadowscales, those Argonians born under the sign of the Shadow, and thus destined for a life in the Dark Brotherhood. 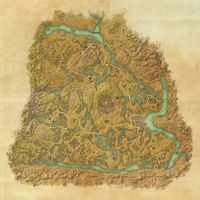 A map of Shadowfen