Something has been luring Imperial soldiers into the ruins. Many have been captured by the giant spiders lurking there.

Just outside Hallin's Stand you can find an injured Captain Gemelle amid the abandoned tents. She can be spoken to see what is going on.

"Wait! Please, stay your blade and listen."
What's happened here?
"Our orders were to look for Redguard insurgents in these ruins. Sounded simple enough … but then the spiders showed up. Legionnaires disappeared.
By the time we figured out what was going on, two-thirds of my company was gone. Please, help me."
You're an Imperial soldier. Why should I help you?
"We've had our fill of this whole damned campaign. Bangkorai Garrison. Hallin's Stand. Now this sand pit. I'll take my troops and go. It's simple as that. We'll head back to Cyrodiil to fight the real war. You have my word.
Will you help or not?" Is dialogue different if quest is done before Hallin's Stand is taken back.
All right. I'll do it.

She will then hand you an Ice Rune which can be used to freeze the cocoon's webbing so the trapped soldier can break free. To find the missing soldiers, just head north into the nearby Nilata Ruins. The soldiers will be in the people-shaped cocoon which will be guarded by various giant Spiders, moving close to a cocoon will allow you to use the Ice Rune on the webbing and free the soldier. 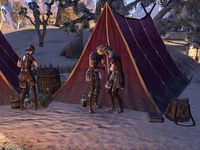 Once five soldiers have been found and freed, you can head back to the camp where Captain Gemelle will be tending to the wounded. Speaking to her will complete the quest.

"My soldiers have been returning one at a time. Some still complain of numbness. Some are half-blind. But they're alive; that's what matters.
Thank you."
You're leaving, right?
"Yes, of course. To Oblivion with this whole campaign folly, and the Seventh Legion.
As you can see, my men are securing their gear and preparing for the march back to Cyrodiil. It's a long journey, but it'll be good to fight where we're needed."