This article is about the race. For the individual enemy, see Skeleton (NPC). 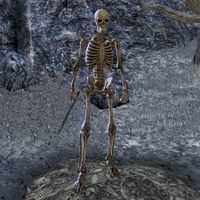 Skeletons are a common type of undead found in dungeons and crypts throughout Tamriel. They originally belonged to different races in life, but only Argonian, Khajiit, and Orc skeletons can be told apart by their skulls and tails. Players can play as a skeleton with the Skeleton Polymorph item. Some NPCs, such as the Stillrise Kothringi and the Blackheart Haven Pirates, can change between their normal race and being skeletons. A variety of skeletal animals also exist, but will use the same animation rig as their living counterparts.

This Elder Scrolls Online-related article is a stub. You can help by expanding it.
Retrieved from "https://en.uesp.net/w/index.php?title=Online:Skeleton&oldid=2391446"
Last edited on 19 April 2021, at 09:29