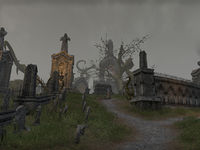 Cath Bedraud is a large cemetery in northern Glenumbra, west of Crosswych. It has been the burial ground of the Breton nobility for millennia, but has been desecrated by the writhing vines and dark necromancy of Angof the Gravesinger and his Bloodthorn Cult.

Dead, frozen Lion Guard Officers can be found at the top of the hill, by each of the gates leading into the cemetery proper. Injured Knights can also be found here. 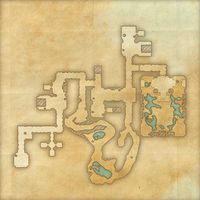 A map of Cath Bedraud

This Elder Scrolls Online-related article is a stub. You can help by expanding it.
Retrieved from "https://en.uesp.net/w/index.php?title=Online:Cath_Bedraud&oldid=2500791"
Last edited on 8 October 2021, at 02:39