The ancient Nedes interred the dead of Skyreach within the massive chambers and passages beneath the city, both commoners and nobles alike.

Skyreach Catacombs are an ancient Nedic crypt located in Upper Craglorn, southeast of Dragonstar. The Scaled Court excavated the ruins in an attempt to control the powerful undead within, but were slain after awakening a lich named Virmaril the Betrayer. According to Skyreach Explorer, Volume Four, Reginus Buca and Verita Numida of the Antiquarian Circle are somewhat responsible for allowing Virmaril the Betrayer to awaken.

These enemies are in the order their respective kings awaken.

Chamber of the Fallen Kings

Defeat the restless souls of the ancient Nedic kings.

The Nede Kings event lies to the north in the Upper Catacombs. When you enter the room, the braziers in the back of the room will light up. Virmaril will raise the spirits of the dead Nedic Kings one by one. The spirits' awakening is on a timer. First is the Sun King, next is the Storm King, then the Flame King, the Forest King, the Blood King, the Spirit King, and the Shadow King follow. The Frost King is the last king to awaken. The kings have no special abilities, but they summon creatures to accompany them. This event is what is described by MMO communities as a "DPS race". Your group needs to try to take down the bosses as swiftly as possible, before you are overwhelmed by the newly awakened kings. The kings will not wait for you to finish the boss you're fighting, and they do not care how many bosses your group is dealing with. Once that minute/minute and a half is up, the next king is going to awaken.

After all of the kings' spirits have been defeated, High King Durac, a vampire, awakens. He will raise the other kings' corpses off of their thrones to assist him. The lesser kings have less health as draugr than they did as spirits, so as long as you have healing, you don't need to worry about killing them until the High King is dead. Make sure you avoid their AoEs as you fight the High King. Start picking off the kings once their High King is down, and complete the event. Defeating the nine kings opens the Lower Catacombs' northern lock.

The Gravelord event lies to the south in the Upper Catacombs. You must defeat a giant, flaming Bone Colossus in order to open the Lower Catacombs' southern lock. The Gravelord calls Reanimated Fiends, which slowly begin to walk towards the undead construct. When they reach the Gravelord, they fall apart and transfer their energy to the Gravelord. After several Fiends have been absorbed, the Gravelord unleashes this energy when it next uses Stomp of Flame, a massive flame AoE. The more Reanimated Fiends you've allowed to touch the boss, the more damage this burst does. Avoid the large AoE when the Gravelord uses it, and try not to let too many Fiends get close to the boss. If

If you are attempting to defeat this boss solo on a Sorcerer, you can make the fight easier by summoning a Volatile Familiar and a Twilight Matriarch. Have your pets up before you engage the boss, use Daedric Prey on the Gravelord and set down your damage over time abilities, then run off towards one of the walls. The Gravelord will engage your pets and ignore you for the most part. Make sure to use your Matriarch's healing ability to keep your summoned pets alive. If the Gravelord notices you, simply run away again, and let it become distracted by the damage your pets are dealing.

Overcome the guardians of the ancient Nedic chest.

Tomb of the Dead Watchers

Prove yourself against the Dead Watchers.

When you engage with one boss, you'll enter combat with all three of the bosses. Watcher Armok is a healer, Shavmar is a time bomb mage, and Garalan is a fire mage. Prioritize whichever one you think will give you the most trouble, and deal damage to them one boss at a time. It may be a good idea to take on Shavmar first, as all of his attacks, including his basic ranged light attack, deal a lot of damage. As long as you avoid his frost abilities and his AoEs, you should be fine, but the hits add up.

Once you defeat all three Watchers, a meteor effect will fall from the ceiling, and a chest appears where it drops. Strangely, a set piece from the Hide of the Werewolf set may drop from it.

Fill the soul gems by defeating spirits to open the way.

The door on the Path of Dread that leads to Virmaril's chamber is protected by a ward erected through soul magic. Virmaril summons ghosts, which you'll need to kill in order to lower the ward so you can enter the next area. They are not particularly difficult compared to some of the other enemies; you've fought these summoned ghosts previously, in the Cavern of Lost Souls.

Virmaril is your final obstacle during the quest. You need to break free if he snares you with a chain made of blue magic. Don't stand in his lich crystal AoEs, and try to use AoEs to burn down the large groups of ghosts he summons at different intervals during the fight. As long as you avoid the damage circles, keep heals or wards up, and focus single-target damage on Virmaril, you should be fine.

A note penned by a dying member of the Scaled Court lies on the ground within the entrance. Scaled Court Zombies infest the first chamber. Mikhail the Lost and the Nedic Kings are located in the northern section of the catacombs. From the first chamber, head north, then west to fight Mikhail. East and north of that room lies the chamber containing the Nedic Kings. There are bone piles and fire pits scattered throughout the catacombs, which skeletons crawl out of when you approach. Ghosts emerge from the closed sarcophagi in any given room whose enemies you begin combat with.

The Gravelord is located south of the entrance. From the first chamber, take the southern hallway, turn west, then take the stairs to the south in this hallway. A chest can spawn outside the Gravelord's chamber. If you continue east instead of turning to find the Gravelord, you'll encounter The Cursed Orator in the hallway. The Ancient Chest event is in the easternmost hallway.

You'll need to fight your way through a few groups of undead here. There are no bosses in these halls.

Nedic ghosts reside here. Saradin the Lost Love is located at the bottom of this section, in the water on the southeastern side below the formation connected to another area by a bridge. Saradin's Diary is on the floor to her right. Saradin is an optional boss. Your goal is to cross the ridge to reach the door on the eastern side of the cave.

This location is full of skeletons. There isn't much of note here.

Tomb of the Dead WatchersEdit

The Path of Dread consists of the bridge that crosses above the Watery Grave. You'll fight more undead as you cross the path, and complete the Soul-Warded Gate event at the end of the path.

Seat of the Betrayer

Virmaril the Betrayer is located on the stone platform ahead. You need to defeat him to advance the quest. Virmaril's Journal can be found on the platform where he is fought, on the south side (to the left, if you're facing the exit).

There are no enemies in this hallway, just passive spiders, a few urns, bookshelves and book stacks. The door at the end of the hallway leads to a ledge at the entrance to the Lower Catacombs. Skyreach Explorer, Volume Four is sitting on a raised brick on the right-hand side of the platform's edge, facing the door to the Upper Catacombs. From here, you can jump down, enter the Upper Catacombs, and exit the dungeon. If you accepted the quest in front of the dungeon, you can now speak to Crusader Dalamar for your daily reward. 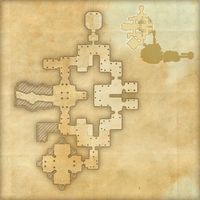 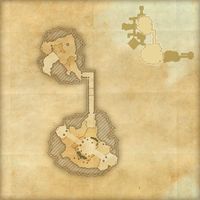 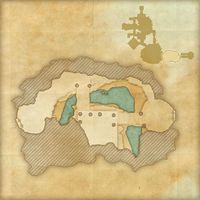 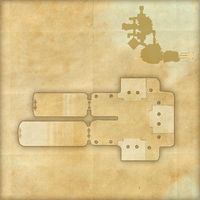 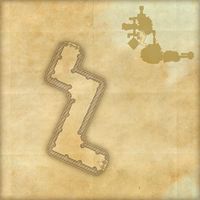