Sai Sahan has recovered from his experiences in the Halls of Torment and is ready to guide me to the Amulet of Kings. He hid the artifact in Sancre Tor, an ancient Imperial catacomb.

The Prophet appears when you are close to a major city.

Talk to Varen Aquilarios in the Harborage. He says Sai Sahan hid the Amulet of Kings in the catacombs of Sancre Tor in the Colovian mountains. He refers you to Sai Sahan, who tells you that the Amulet is in a vault protected by a ward of Stendarr— the God of Justice, Mercy, and Well-Earned Luck.

Enter the portal to Sancre Tor, and follow the path into a large room. As you enter, a projection of Mannimarco appears. He is fully aware that you are looking for the amulet, and used Sai Sahan's escape as a way to easily find its location. He tries to get the location out of Sai Sahan a final time— to no avail— before vanishing. 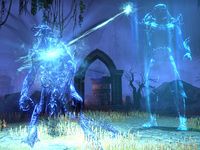 Talk to Sai Sahan. He believes that, if you can receive Stendarr's blessing and pass through the barrier in place, you might be able to retrieve the amulet before Mannimarco can.

Down a narrow corridor, and before you reach the Inner Chamber, you will pass a gate on your left. Sai Sahan will identify it as the Crypt of Heroes, which he may have warned you to avoid back in the Harborage. You may enter if you wish, but it is entirely optional. If you do so, Mannimarco will quip about entering a crypt with a necromancer about, and you'll have to fight several mobs of undead warriors. Make sure to examine the large tomb in the center of this area— the entrance is on its northern side. You'll find a chest with some treasure, and a room full of urns. If you loot the tomb, Mannimarco will remark on your efforts as you leave it, and offer you a more formidable foe as a result: the Lord of Iron and Woe.

In the grassy area of the inner chamber, Mannimarco appears again and reveals his plan to steal the Amulet without Molag Bal's knowledge. The ward of Stendarr will hide him from the God of Schemes' view, then he will use the Amulet's power as the greatest soul gem ever to trap Molag Bal's soul.

He summons three Worm Cult necromancers and a Bone Colossus, which will summon smaller skeletons alongside them. Defeat them and head east to the Inner Courtyard.

Once you enter the Inner Courtyard, Sai Sahan asks for a brief respite, as he is exhausted and needs to rest. Optionally, you can also talk to Lyris Titanborn before Sai Sahan. If you talk to her, she'll mention that his determination will allow him to press onwards, and that she will make her own sacrifices for the group.

Talk to Sai Sahan to proceed; he'll mention that Mannimarco's sorcery opened up old wounds he got inside the Halls of Torment, and has taken a worse toll on his mind than any of the pain his body has endured. Despite this, he will press on.

You need to consecrate the shrines with Stendarr's blessing in the Dragonguard Tomb. The door to the Dragonguard Tomb is to the west. Inside, Mannimarco announces to your group that he raised Sai Sahan's fallen comrades. Sai Sahan does not want to kill his former friends, so he relies on you for most of the attack.

Make your way to the Shrine of the Divines, a brazier in the west end of the tomb. Once it is lit, head back east to the Inner Tomb.

Follow the eastern passage to the Reman Vault. To consecrate this altar, you need to lower the drawbridge first. There are four levers before it: when you pull one of them down, the ones beside it will move in their opposite position. Pull the 2nd from the left, then 3rd from the left, then the leftmost lever. If you get the sequence wrong, the fourth lever may reset it, so you can try again. (If you follow the river west, there is a small chest hidden behind a tall rock that you can loot.)

Once you light the brazier, Mannimarco summons some undead to appear and attack you; clear them out and leave the area.

In the Antechamber, Mannimarco appears again. He will once again fantasize about the power the Amulet will grant him, as he visualizes all of Tamriel bowing to him. Defeat the waves of enemies, then head to the Vault of Kings.

The Amulet of Kings at last!

Once you enter the Vault of Kings, talk to Sai Sahan. He will tell you to use the Ring of Stendarr's Mercy on the door by standing within the casting circle. Approach the door, then use the ring within its glow.

Inside, kill Mannimarco. Once you do so, he says that it is merely a step towards immortality. His dreams of total domination, however, are immediately shot down, as Molag Bal notices his treachery. A Dark Anchor opens, and Mannimarco is forcefully pulled into it, to be taken to Coldharbour for eternal torment.

To the west is the Amulet of Kings. Take it, and return to the Harborage.

Talk to Varen for your reward. With Mannimarco defeated and the Amulet of Kings back in the hands of the Companions, the group can continue moving forward in their plans to stop Molag Bal— after a much-needed rest.