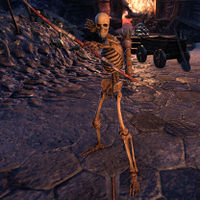 Skeletal Archers are generic skeletons that can be encountered across Tamriel. They attack using the bows which they carry.

Archers summoned by Frost Dragons will have different abilities:

Skeletal Archers summoned by dragons in Elsweyr are Khajiit skeletons which use poisoned arrows to attack.

This Elder Scrolls Online-related article is a stub. You can help by expanding it.
Retrieved from "https://en.uesp.net/w/index.php?title=Online:Skeletal_Archer&oldid=2410601"
Last edited on 22 May 2021, at 22:00