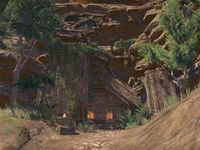 Rimmen Necropolis is a public dungeon found in Northern Elsweyr. Darloc Brae and his army are buried here, along with several important Manes.

The book On the Trail of the Forgotten Mane can be found at the entrance next to Saviwa. To the southeast, Darloc Brae's undead legion has erected barricades to defend against the Dremora. The dungeon's group event is located directly in the center of this room, just before the bridge leading to the Tomb of the Manes. The Champion of Mehrunnez and the Aspect of Darloc Brae are pitting their minions against each other, and you can jump in. You will face three waves of enemies before the champions teleport down to face you themselves.

Tomb of the Manes

The door to the Tomb of the Manes is in the northernmost portion of the central chamber, up a flight of stairs. A heavy sack can be found on the west side of the room. Jinninji-ri, Tullar-dra and Zebiden-jo can be challenged here after you activate the Ancient Urn in the center of the room. When you defeat them, you'll be able to loot the Ancient Urn.

Daedroths lumber through the passages. Dremora Ravagers work the forge in the southwest chamber. Flame Atronachs linger in the halls and forge. A chest can spawn in the center of the eastern portion of the northwestern chamber. Bakea the Forge Guardian is the champion of the southwestern chamber, and resides in the western half of the room. The Rimmen Fragment is located within the southwest chamber, on a raised platform in the southwest corner of Bakea's room. Dremora Alchemists can be found in the northwest chamber, brewing concoctions while Bulwarks torment Clannfear. Ogrim occasionally vomit into the alchemists' cauldrons. When you engage a group of Daedra in battle, more Daedra will be summoned in a flash of purple light. Scamps, Banekin and Clannfear will be summoned this way. Gormandizer Blyhicius resides in the western half of this chamber.

There are several Achievements associated with this public dungeon: 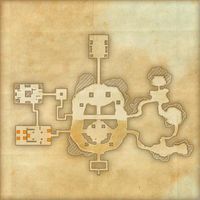