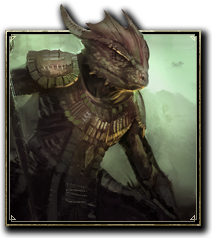 The Argonians are possessed of a cool intellect, and are well-versed in the magical arts, stealth, and the use of blades. They are also guerilla warfare experts, long accustomed to defending their borders from invaders. They often serve as the scouts and skirmishers for the forces of the Pact. Nagas are a "subspecies" of Argonians found further south in places like Murkmire.

A list of all the Argonians encountered in ESO can be found here.

The racial skills of the Argonians reflect their people's perilous swamp environment; giving them bonuses to healing done, restoration staves, disease resistance, resources gained from consuming potions, swimming speed, as well as base health and magicka.

Argonians have an associated skill line that complements their lore-based abilities with a focus on quicker healing powers and their inherent water abilities. Abilities are listed below. Notes