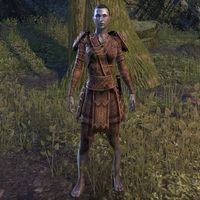 Maeonius is an undead Kothringi found in Stillrise Village. She is one of War Chief Helushk's followers, and works to train his fighters. She is an ambitious fighter who openly embraces undeath, seeing it as the means to riches and glory.

Dialogue when spoken to before quest:

Why? Who are you going to fight?

"Ask War Chief Helushk. He's the only leader with vision in Stillrise.
Well, I suppose the Chieftain's okay, but Shaman Chirah and his whiners are driving the rest of us all crazy!

Dialogue when spoken to during The Thin Ones:

"Don't bother us! We're training!"
Are you going to war?
"We'll see, we'll see. The War Chief has plans. I think you'll be surprised."

Dialogue with the player, after they learn that Stillrise Village is full of the undead:

"Watch it. You're likely to get hit standing there."
Don't worry. I'll heal.
"Ha! That's something we don't have to worry about. Stillrise Warriors may fall, but we always come back! The War Chief will turn us into Tamriel's most feared army. Nothing can defeat us."

Don't you get tired of undeath?

"Are you crazy, or have you been talking to Chirah's Followers?
Those miserable fanatics would rather die than live forever. Yes, we're undead, but we're also immortal! We can fight and fall a thousand times and never die."

Who are you going to fight?

"Anyone the War Chief says! Oh, we're not going to just go out and slaughter people. We'll fight for the causes Helushk says are right, and just.
And we'll get paid for it, too. We'll be the wealthiest mercenary company in the world!"