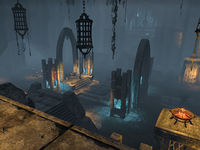 Abagarlas is an ancient Ayleid city whose inhabitants used to worship Molag Bal. During the related quest, you travel to the ruins of the city and see it through the memories of Ostarand when it still housed the Mortuum Vivicus.

Guildmaster Sees-All-Colors's portal from the guild hall will bring you to the northern chamber. The portion of Abagarlas you will explore is the city's temple to Molag Bal. She will cast a spell to allow you to relive the memories of Ostarand, one of the Ayleids you saw in the previous quest. Ostarand was responsible for the fall of Abagarlas. When the vision begins, you'll see three of the Knights of the Gleaming Blade: Curano, Endarre and Lanath. Endarre heads outside to keep the undead hordes of Anumaril at bay, while Lanath and Curano guard the entrance to the temple. Skeletal minions appear throughout the temple while you're seeing the world through Ostarand's eyes; they do not appear in the present-day with Sees-All-Colors.

Heading south through the halls will bring you to Prince Malyon's chamber. A note titled The Unholy Temple is located upon the table on the raised platform to the south. Malyon is performing a ritual on the west side of the room. Around the bend in the next hallway, the Journal of Bernamot the Great lies next to a skeletal corpse that's been crushed by a cave-in. A copy of the lore book, Exegesis of Merid-Nunda, lies next to the corpse's backpack. A statue dedicated to Molag Bal lies at the western end of the hallway south of this corpse. You'll head east then south to reach the heart of the temple, where Prince Malyon's mother, Queen Palolel, is maintaining the Mortuum Vivicus. A written sermon is located atop a table on the east side of the room. 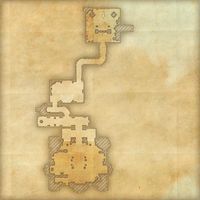