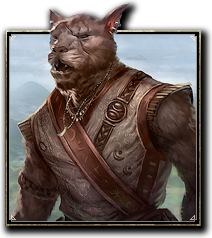 The population of the proud feline Khajiit has dwindled in recent years following a devastating outbreak of Knahaten Flu. They owe a great debt to Ayrenn, Queen of the High Elves, for her help in restoring order from the chaos that followed the plague. They have a wry wit and a hedonistic outlook, but they are fearsome on the field of battle. They are the strong arm of the Aldmeri Dominion.

The racial skills of the feline Khajiit reflect their natural versatility and guile, giving them bonuses to pickpocketing, stealth, resource recovery, as well as base health, magicka, and stamina. These bonuses help them thrive in many ventures of life.

Khajiit have an associated skill line that complements their lore-based abilities with a focus on quicker healing powers, increased stealth abilities and their hand-to-hand combat abilities. Abilities are listed below. Notes