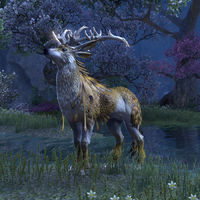 Caanerin is an indrik matriarch and world boss that can be found at Indrik Frolic. Caanerin is an ancient Indrik with a powerful connection to Y'ffre. The last time she appeared on Summerset and returned to her ancestral glade, she fawned a whole herd of lesser indrik and destroyed half of Russafeld. The Sapiarchs have erected warding stones around the glade in an effort to prevent her from returning. These stones need to be reactivated.

Force of Nirn
Caanerin levitates into the air as a large AoE crawls out from beneath her, then slams her hooves into the ground to release a burst of blue Nirnic energy. All players within range will be affected by an AoE that appears beneath them, and knocks them back if not dodged. A smaller AoE will bloom beneath affected players and damage them with the same energy Caanerin released earlier.
Hyper Awareness
Caanerin hovers in the air and summons a herd of spectral indrik to stampede across the glade, dealing damage to all in their path.
Caanerin's Projection
Summoned during Hyper Awareness.
Essence of Nirn
Caanerin rears back onto her hind legs. When she brings her forelegs back down, bright green energy blooms out from beneath her in five directions, dealing poison damage. Essence of Nirn can manifest as shock damage during Heat Lightning, poison during Return the Dead and flame damage during Conflagration.
Return the Dead
When the poison from Essence of Nirn blooms across the battlefield, Returned Dead Warriors, Mystics and Rogues rise from the soil.
Heat Lightning
Caanerin bucks and thrashes wildly, electrifying the fog-covered water in the Frolic. All players not standing on raised ground are at risk of being fried. She also targets one player with lightning strikes that follow them.
Conflagration
Caanerin rears back and charges. setting off a series of fiery explosions and leaving a trail of devastating fire in her wake.
(?)
Caanerin sends icy gales flying in waves. These gales have their own AoE, and they travel in one direction until they dissipate.
Teleport
Caanerin teleports across the glade.

There is one Achievement associated with this creature:

This Elder Scrolls Online-related article is a stub. You can help by expanding it.
Retrieved from "https://en.uesp.net/w/index.php?title=Online:Caanerin&oldid=2397760"
Last edited on 28 April 2021, at 04:58