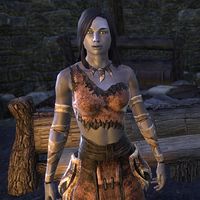 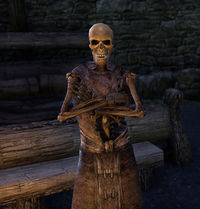 Beginning the quest by accepting it through one of the three scouts:

"Our scouts let you through, yes? You have courage to visit Stillrise Village despite the necromancers who torment us."
Tell me about these necromancers.
"The Worm Cult necromancers encamped nearby raided our village last night. We trapped three of their lieutenants inside our huts, but they refuse to surrender."
There are Worm Cultists in your village?
"Our scouts call them Gorag, Felra, and Draguar. We tricked them into the cellars below our huts and bolted the doors.
Perhaps you can convince them to surrender. If you confront them, Stillrise Village would call you a friend."
I'll take care of them.

Accepting the quest through her:

"You're brazen to wander into Stillrise Village. We won't negotiate with necromancers."
Necromancers? What necromancers?
"You don't know? Then you can't be with the Worm Cult.
Those foul necromancers raided our village last night. We trapped three of their lieutenants in our huts, but they're quite dangerous. We're at an impasse."
There are Worm Cultists in your village?
"We tricked Gorag, Felra, and Draguar into our cellars and bolted the doors behind them. Still they refuse to lay down their weapons.
Perhaps they'll listen to an outsider. If you convince them to surrender, Stillrise Village would be in your debt."
I'll take care of them.

"Our warriors guard the huts where the cultists are trapped. Unbolt the cellar doors to gain access.
So far they've refused to see reason. If it must come to blows with their lieutenants, I understand."
Why would the Worm Cult raid your village?

"Stillrise Village keeps to itself. Because of this, they think we'd make perfect slaves."

Your skin is a strange color. Are you ill?

"My what? Oh, it's … we're Kothringi. After the great plague from decades past, I fear Stillrise Village is the last of our people."

After investigating the captives, she'll say:

"War Chief Helushk's runners told me the Worm Cultists wouldn't surrender. Unfortunate, but no fault of yours. Stillrise Village is in your debt.
In truth, I feared the Worm Cult lieutenants went to our cellars on purpose, to work dark magics from within our village."
What dark magics do you fear?
"Well …. You've proven yourself a friend of our village. As a friend, we'll entrust you with our secret.
It's simpler to show than explain. Please, do not be alarmed."

"Fear not, we're the same people we were before we gained this … affliction.
Years ago, a terrible sickness swept through our lands. I had to do something to keep my people safe. It's why I made a deal with the Daedra."
You bargained with Daedra? Which Daedra?
"Before the sickness, our miners uncovered an old temple to Clavicus Vile. When we were dying, I sought the Daedric Prince of Bargains to save our village, at any cost.
I begged the Daedra for immunity to the sickness. You can see the cost."
What does this have to do with the Worm Cult?
"Last night the cultists stole the soul gem array, the relic holding our spirits. In time, they'll use it to enslave us.
We musn't [sic] become thralls of the Worm Cult! Shaman Chirah has a plan to stop them, but it will require your aid. Please, speak with him."
All right.
"The Worm Cult will enslave us all without your help. Please, Stillrise Village must survive. We've already lost so much …."

If you speak to her after receiving the Curse of Stillrise, she'll say:

"How is this possible? You didn't bargain with Clavicus Vile, did you?
One moment, the curse upon you isn't permanent. This is wonderful, for both of us! Quickly, retrieve the soul gem array before it wears off!"

"Due to the theft of the soul gem array, the war chief and shaman asked me to step down. But as they dispute our future, it's my right to appoint an arbiter. So I appoint you."
What are you asking me to decide?
"Whether Stillrise Village continues or ends. Preserve the soul gem array and we remain as we are, in this state between life and death. Destroy it and you end the curse, allowing us a final rest."
Why me?
"Experiencing our curse uniquely suits you to deciding our fate.
You should hear the counsel of War Chief Helushk and Shaman Chirah before making your decision."
I'll speak with them and decide.

After exiting the chapel, you'll find her in the center of the village waiting to speak to you. If you decided to use the Ice of Stasis, she'll say:

"You've chosen what we couldn't for ourselves. Without the fate of the soul gem array held over us, we can finally begin to think of our future.
Thank you, arbiter. You are always welcome in Stillrise Village."
I did what I had to do.
"You've protected Stillrise Village from weak thinking and necromantic tyranny. More than anything, you've given us a future. Possibly beyond these huts in this swamp.
We're our own people now, and we couldn't have been without your help."

If you decided to use the Fires of Destruction, she'll say instead:

"And so it ends. You made the choice we could not. My people are now at peace."
I did what I had to do.
"At last! You've freed us from our miserable existence. This was no life, just a mockery of better days.
I feel Clavicus Vile's curse fading. It won't be long, now. Thank you for allowing us the dignity of death."

"I will join my people soon. Thank you again."