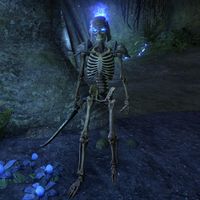 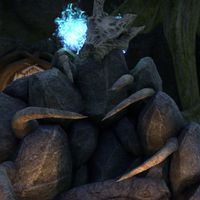 Olphras is a skeleton found at Bone Orchard. She acts as a sort of leader for the spirits bound to it, and like most of them, is not fond of Dringoth.

When Dringoth first arrives in the Barrowbough, they will speak to each to each other. Olphras is not happy to see Dringoth:

Olphras: "Dringoth! You were banished, yet you dare return?"
Dringoth: "Olphras, listen to me! We're in danger. Necromancers are trying to kill the Barrowbough!"
<Olphras begins to laugh.>
Olphras: "You warn of danger. Dringoth, who leveled nations with his girth!"
Olphras: "Your restlessness trapped us here in the first place!"
Dringoth: "There are a vast number of Elf bones in the Bone Orchard. If we all use them together, we can drive out the invader!"
Olphras: "Together? Since when have you done anything that wasn't for yourself?"
Olphras: "Once more you bring danger upon us, then beg for our help to end it. No longer! You'll remain beneath the Barrowbough until the world forgets you!"
<Dringoth's skeleton body is magically pressed to the ground.>
Dringoth: "Olphras, wait!"

You can then speak to Olphras, who wants Dringoth to be bound again so he can die a final death. At this point you can possibly Persuade her to let him help, otherwise you can find another option if you ask her to explain the wrongs Dringoth committed:

"We have no quarrel with you, living one. Indeed, we thank you for your part in awakening us. The invaders in the Barrowbough must be stopped!"
Why can't Dringoth help fight the Worm Cult?
"Because we must punish him for his transgressions. The Elf bone shell to which he was banished will no longer suit him. We'll return him to the old skull around which the Barrowbough first grew, the very skull that surrounds this room."
Why do you have to do this now?
"Dringoth's crimes are unforgivable. We once sought a true death in the farthest reaches of the world, but his aimless wanderings led to our imprisonment! Here, we can never die!"

[Persuade] Dringoth wants to stop the Worm Cult. Why not let him help?

"Perhaps we were too hasty.
Very well. Because Dringoth broke his exile only to warn us of so great a threat, we'll allow him to leave us in peace. But only if he aids us in driving out the invaders."

I won't stand in your way. [Dringoth dies]

Tell me what he did to you.
"That story is as long as it is old. You would endure the telling?"'

"In days long past, our old bones longed for the sun's sweet kiss, for friends we knew in life. But our restless wanderings caused untold suffering. We went far away, to be forgotten by the world. To die.
But Dringoth continued to wander. To destroy."
Why?
"He couldn't bear to stay in one place for long. Yet while he fixed his gaze upon the horizon, he forgot to watch the ground. Whole cities crumbled beneath him.
Amidst this devastation, the Wood Elves of Falinesti saw his wanderlust for what it was."
What did they do?
"They invited him to join the travels of their walking city. His elation gave them time to ensorcel him into slumber. Unaware, he laid down to sleep.
They buried him, and planted a seed in his skull. In time, it became the Barrowbough."
If his bones slept, why do you hate him?
"The Wood Elves of Falinesti feared our fading bones would wander, so they sought us out and carried us to the Bone Orchard. Here they interred us beneath shrines to Y'ffre, ensuring we would never be forgotten.
Because of this, none of us can die."
Did Dringoth ask them to seek you out?
"No. In telling the story, we see he did not.
But his wanderings led to great destruction, and his selfishness led our bones to this prison. He afflicted us with the doom of endlessness, and for this crime he cannot be forgiven."

After hearing her story, you are given the choice again with Dringoth's exile being a third choice:

[Persuade]: He came here to stand with his family against invaders. Is it justice you seek, or vengeance?

"You shame us, outsider. Perhaps we judge him in anger.
Very well. Dringoth will stand with us to keep the Barrowbough from harm. When the invaders are repelled, he is free to decide his own fate."

"Perhaps we were too hasty.
Very well. Because Dringoth broke his exile only to warn us of so great a threat, we'll allow him to leave us in peace. But only if he aids us in driving out the invaders."

He deserves your punishment. [Dringoth dies]

Once you have made a choice, you will need to repel the invading Worm Cult.

Olphras: "Enemies at the inner gate! Come quickly, we'll drive out the Worm Cult!"
Olphras: "Turn back the invaders! Drive them from our home!"

After the quest, if Dringoth was spared:

"A heated battle. I haven't felt its like in ages. With luck, the invaders will crawl away from this place and leave us to our slumber."