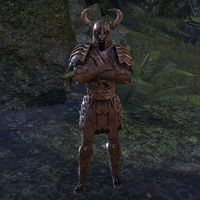 War Chief Helushk is a Kothringi warrior in Stillrise Village. He and his supporters revel in undeath and seek to become perfect warriors, and are at odds with Shaman Chirah.

"A stranger to Stillrise? You have some surprises in store for you here. If you have not spoken to Chieftain Suhlak, you should." 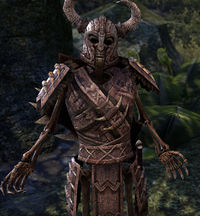 After Suhlak reveals the undead curse:

"Eternal life is full of advantages. No need to pull your blows when training.
What do you need, stranger?"
Shaman Chirah said you would let me into the temple.
"That fool thinks Worm Cultists can sway the proud warriors of Stillrise Village, does he? I'd say the man lacked a spine, if I couldn't see it for myself.
We have no hearts to fill with fear, or blood to run cold. No blow is mortal. We're unstoppable."
Then how did the Worm Cult defeat you?
"We can't die, but we can fall for a time. It's how the cultists overpowered one of Shaman Chirah's acolytes and stole the soul gem array.
Here's the temple key. When you're done, bring it to Acolyte Morag. And tell her not to lose this one too, would you?
I'll do that.
"A shame you're flesh and blood. I'd let you train, but my warriors might forget your squishy parts."

You don't mind being a skeleton?
"We need no sleep or food. There's no sickness and no pain. If I fall in battle, I recover.
I don't care if I can't see, taste, or feel the same way I used to. Clavicus Vile's blessing makes us perfect warriors."

'Do the other villagers want to remain this way?
"Sure, the ones with marrow where it counts. The rest listen to Shaman Chirah whine about a "curse." But they'll come around."

And if they don't?
"I'll do what I've always done: protect my people. From themselves, if necessary."

If you speak to him after receiving the Curse of Stillrise, he'll say:

"Ha! Welcome to the invulnerable fellowship! Wait, your blessing doesn't feel … permanent.
Ah, well! Enjoy it while it lasts."

If you speak to him after recovering the soul gem array, he'll say:

"Outstanding! Once you hand the soul gem array to Chieftain Suhlak, we can make sure something like this never happens again."

You can either agree with Helushk or tell him you consider Chirah's proposal:

I'll preserve it and protect Stillrise Village from necromantic control.
I should speak with Shaman Chirah before I decide.

If you tell Shaman Chirah that you will destroy the soul gem array, Helushk will yell and run out the hut:

During the battle inside the Odious Chapel, he'll say:

If you agree with Helushk to preserve the array, he'll say:

"If we can protect the soul gem array, our village will have nothing to fear from anyone!"

After using the Ice of Stasis, he'll be back in his post outside the Odious Chapel and will say:

"You're back, and with meat on your bones. Everything went well in there?"