Online: The Thin Ones

I met Kothringi from Stillrise Village who told me Worm Cult necromancers plague their village.

On the way to Stillrise Village, you'll see Gareth, a Kothringi villager, on the road. Speak to him to begin the quest:

"Hold! Who are you?"
A traveler. Who are you?
"Gareth, from Stillrise Village. I'm watching for Worm Cultists. Downed four of them today, but they keep harassing our village.
If necromancers don't scare you away, Chieftain Suhlak could make use of you. She's in the middle of our village."
I'll speak with her.

Suhlak can be found in a hut almost directly south of the Stillrise Village map marker. Speak to her:

"Our scouts let you through, yes? You have courage to visit Stillrise Village despite the necromancers who torment us."
Tell me about these necromancers.
"The Worm Cult necromancers nearby raided our village last night. We trapped three of their lieutenants inside our huts, but they refuse to surrender."
There are Worm Cultists in your village?
"Our scouts call them Gorag, Felra, and Draguar. We tricked them into the cellars below our huts and bolted the doors.
Perhaps you can convince them to surrender. if you confront them, Stillrise Village would call you a friend."
I'll take care of them.
"Our warriors guard the huts where the cultists are trapped. Unbolt the cellar doors to gain access.
So far they've refused to see reason. If it must come to blows with their lieutenants, I understand."
Why would the Worm Cult raid your village?

"Stillrise Village keeps to itself. Because of this, they think we'd make perfect slaves."

Your skin is a strange color. Are you ill?

"My what? Oh, it's ... we're Kothringi. After the great plague from decades past, I fear Stillrise Village is the last of our people."

Gorag is trapped in the cellar of a hut to the northwest; Draguar, to the northeast; and Felra, to the south. None of them will be willing to surrender, so enter each cellar via the trapdoors and kill each Worm Cultist. Then, return to Suhlak's hut and speak with her:

"War Chief Helushk's runners told me the Worm Cultists wouldn't surrender. Unfortunate, but no fault of yours. Stillrise Village is in your debt.
In truth, I feared the Worm Cult lieutenants went to our cellars on purpose, to work dark magics from within our village."
What dark magics do you fear?
"Well ... You've proven yourself a friend of our village. As a friend, we'll entrust you with our secret.
It's simpler to show than explain. Please, do not be alarmed."

The environment will flash white briefly, and Suhlak will be revealed to be a skeleton. Speak to her:

"Fear not, we're the same people we were before we gained this ... affliction.
Years ago, a terrible sickness swept through our lands. I had to do something to keep my people safe. It's why I made a deal with the Daedra."
You bargained with Daedra? Which Daedra?
"Before the sickness, our miners uncovered an old temple to Clavicus Vile. When we were dying, I sought the Daedric Prince of Bargains to save our village, at any cost.
I begged the Daedra for immunity to the sickness. Yuo can see the cost."
What does this have to do with the Worm Cult?
"Last night the cultists stole the soul gem array, the relic holding our spirits. In time, they'll use it to enslave us.
We musn't become thralls of the Worm Cult! Shaman Chirah has a plan to stop them, but it will require your aid. Please, speak with him."
All right. 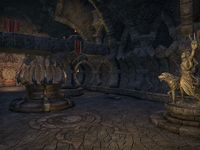 The shrine to Clavicus Vile

Shaman Chirah is in a hut southeast of Suhlak's hut. Speak to him:

[see "How can I safely recover the soul gem array?" below]

How did the Worm Cult steal the soul gem array without dying themselves?

"The cultists forced their undead thralls to carry it away. Such will be the future of Stillrise Village if you don't recover the soul gem array."
How can I safely recover the soul gem array?
"Take this totem. War Chief Helushk can let you inside the Daedric Prince's temple. Once inside, place the totem upon the blood fountain as an offering to Clavicus Vile."
I'll speak with War Chief Helushk.
"I fear there's little time before the Worm Cult discovers the secrets of the soul gem array. Be quick, before they add us to their ranks.
Yet another benefit of this damnable curse."
Tell me about the curse.

"Decades ago, the Knahaten flu swept through the land. The children were first. By Z'en, I can still see the bodies ....
But Z'en couldn't save us. So at Chieftain Suhlak's behest, I prayed to Clavicus Vile. He bestowed this mockery of salvation upon us."
Without the curse, would your village have survived?
"You call this survival? To never again taste guar-flesh, nor feel a lover's touch? We are but shadows in the water.
Some feel the curse is a Daedra's cruel jest, yet I thank Clavicus Vile for a virtal lesson. Immortality is the true curse, you see?"

Why can't you retrieve the artifact yourself?

"With the soul gem array in the hands of the Worm Cult, they can influence us through our curse. They could force us to surrender, attack one another ... any number of awful things.
But they don't possess your soul. They hold no power over you."

War Chief Helushk is to the west, by the cliffside. Speak to him:

"Eternal life is full of advantages. No need to pull your blows when training.
What do you need, stranger?"
Shaman Chirah said you would let me into the temple.
"That fool thinks Worm Cultists can sway the proud warriors of Stillrise Village, does he? I'd say the man lacked a spine, if I couldn't see it for myself.
We have no hearts to fill with fear, or blood to run cold. No blow is mortal. We're unstoppable."
Then how did the Worm Cult defeat you?
"We can't die, but we can fall for a time. It's how the cultists overpowered one of Shaman Chirah's acolytes and stole the soul gem array.
Here's the temple key. When you're done, bring it to Acolyte Morag. And tell her not to lose this one too, would you?"
I'll do that.
"A shame you're flesh and blood. I'd let you train, but my warriors might forget your squishy parts."
You don't mind being a skeleton?

"We need no sleep or food. There's no sickness and no ain. If I fall in battle, I can recover.
I don't care if I can't see, taste, or feel the same way I used to. Clavicus Vile's blessing makes us perfect warriors."
Chieftain Suhlak and Shaman Chirah called it a curse.
"Shaman Chirah couldn't tell his coccyx from a hole in the ground.
As for Chieftain Suhlak, well .... She needs to stop regretting who we once were and consider what we can become."

Do the other villagers want to remain this way?

"Sure, the ones with marrow where it counts. The rest listen to Shaman Chirah whine about a 'curse.' But they'll come around."
And if they don't?
"I'll do what I've always done: protect my people. From themselves, if necessary."

With that, proceed through the cave to Helushk's right and enter the Odious Chapel. Interact with the Blood Fountain inside, and you'll hear the voice of Clavicus Vile himself:

"You bear a gift? How thoughtful! But I can't accept it without providing one of my own."
"I know! I'll share the same gift I gave Stillrise Village. Now you can play skeever-wicket with your own skull! Hahaha!"

Your character will be converted into a skeleton, overriding any outfits and costumes; this effect will last whenever you are in or near Stillrise Village. Exit the Chapel and speak to Acolyte Morag, who is standing just outside of a hut almost directly under Stillrise Village's map marker:

"Shaman Chirah told me to expect you, but .... Wait, something's off. Beyond your flesh and blood, I mean.
Z'en's blessings! The curse upon you is temporary. You can safely recover the soul gem array!"
Are you certain I won't be a skeleton forever?
"I'm positive. Shaman Chirah and I studied the curse for decades. This is Clavicus Vile's way of being playful, I suppose ... though I don't presume to know the intentions of any Daedric Prince."
While I'm like this, am I invincible?
"No. Despite what War Chief Helushk would tell you, sheer force can pummel us into the ground. Without Shaman Chirah's magic, my bones would still be in the pile where the Worm Cult left me.
Lousy mushroom-nibblers."
What kind of magic?
"Healing magic works. We often use magical fonts recovered from the temple, like the one next to me.
The cultists took one last night, but Shaman Chirah has another. The rest are inside the temple. You're welcome to use them while you're still ... underfed."
Do you know where the Worm Cult took the soul gem array?
"Lucky for us, I think ahead. Years ago I fastened one of my toe knuckles to the soul gem array. I can sense it's still in their nearby camp.
After you give those moss-gargling cultists a good pounding, bring it straight to Chieftain Suhlak."
I'll bring her the soul gem array when I recover it.

Your next destination is the Worm Cult encampment north of the village: The Vile Pavilion. Kill your way through reanimated skeletons and Worm Cultists, and you'll find the soul gem array on a pedestal, being tampered with by Bonecrafter Lashakh. You'll have to kill her before retrieving the array.

Once you have the array, return to Chieftain Suhlak, who'll be inside of her hut with Chirah and Helushk. Speak to Suhlak to complete the quest:

The Bargain's End can be started immediately after this.